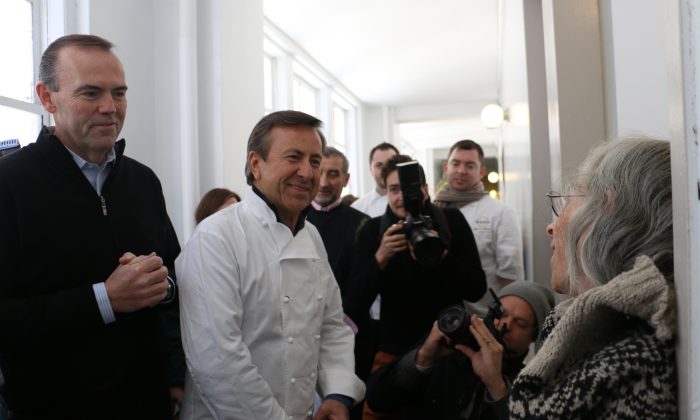 NEW YORK—Citymeals-on-Wheels serves 18,000 elderly residents in all five boroughs. On Wednesday, the program took a step further. Not by providing more meals, but tastier ones.

New York City chefs will take turns to prepare restaurant-style meals during a year-long program called “Chefs Deliver.” With a kick-off on one of the coldest days of the year, the program is a special treat to home-bound residents.

“It’s a perfect day,” said Charles Palmer, one of the coordinators of Chefs Deliver. “They’re not going outside today… If they’re not delivered something, they may not even be eating that day.”

But they will have a fine meal today in the great tradition of haute cuisine. Each chef participating in the event made 100 meals, with a sampling of French, Italian, American and Indian cuisines.

Toby, an 80-year-old resident of a West Village artists’ cooperative, was one of the first to enjoy the gourmet feast. A former dancer, Toby has lived in Westbeth Artists’ Housing since 1970 when it first opened.

“They told me you weren’t coming today, the people who came yesterday, so I’m not ready,” she said as she opened the door.

Westbeth Artists’ Cooperative was originally funded by the National Endowment for the Arts and the J.M. Kaplan Foundation to provide an affordable residence for artists and their families in New York City.

When it was first conceived, it was in an unknown neighborhood in the meatpacking district and residents petitioned to have it moved for safety reasons. Now the complex of 13 buildings is owned by the non-profit Westbeth Housing Development Fund Corporation in what is now the ritzy West Village.

Over half of the co-op’s residents are over 50, making it a Naturally Occurring Retirement Community. Many of the residents qualify for the Senior Citizens Rent Increase Exemption program through the City’s Department for the Aging. The DFTA, through Meals-on-Wheels also provides meals during the week to 14 of the building’s residents. On weekends, holidays and in emergency situations Citymeals-on-wheels steps in with funding from private sources.

“I felt if I ask enough chefs in town to contribute to Citymeals preparing some meals once a month, I will ask them only once a year to do it,” said Daniel Boulud, the other mastermind behind Chefs Deliver. “The importance is to be able to take an initiative to make, once in a while, something different for these people, but also to grow the awareness for younger chefs as well.”