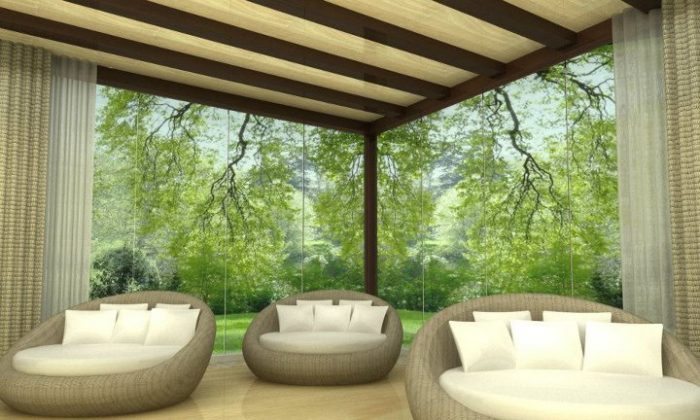 Home as a Sanctuary

SAN FRANCISCO—Whether it’s a room to entertain, work, or recharge, your home should never make you feel like you need to get out. A truly serene room is calming, but invigorating.

“I’m very strong about health and wellness and taking care of oneself, and I believe that there is a power in design to create spaces that are soothing to the soul,” says interior designer Karen Villanueva. “No matter what your job is or who you are, or how old you are, at the end of the day it’s about having a place to retreat and come home to.”

Your home is your sanctuary, and it’s not hard to have it seem like one. Step one: bring the outside in.

“Oftentimes people won’t understand why they feel so good outside, but it’s part of their natural environment,” Villanueva said. “It’s part of Mother Nature, and there’s so much beauty outside, smelling fresh air and feeling that crisp breeze on their skin.”

Plants can be used in a variety of ways, from fresh-cut flowers to potted plants, a vertical garden, or as a barrier for privacy by setting them outside a window.

But beyond literal greenery, nature has much to offer and can be implemented in every aspect of your design. Whether you notice at first-glance or not, natural fabrics and finishes give the home a more familiar feel.

“It’s really about things that are present in nature,” Villanueva said. “If it’s not plants, it might be a weathered wood piece. It might be a water feature.”

“Sumptuous fabrics and tactile scents are very important to me,” she said. When choosing textures, she suggests picking familiar fabrics that evoke a comforting feeling. Even if it’s an item that doesn’t stand out, “just the look of it is very lush, so it connects to the soul, it connects to the spirit.”

“Pieces in the room that I might use connect to the people, it’s about relating to something that’s comfortable to them,” she says.

Being in the Bay Area, there are many great natural views of the water, and if you have a great view, it’s a good idea to let it in rather than overpower it, Villanueva said.

Villanueva, who started her own firm just over a year ago, points to her San Francisco Designer Showcase room at the Herbst Manor—the penthouse “spa” retreat—as an example. The hills and bay make up the backdrop of the room, and evoke what Villanueva describes as a contemporary, serene space. “It’s really about reflecting nature.”

Villanueva herself was inspired by “that quintessential San Francisco fog,” and opted for a gray instead of white walls. “That almost ethereal color, that soft gray in the sky … so I looked specifically for a beige-gray color, and it has that softness to it, it hugs you, envelopes you.”

She says she doesn’t just draw inspiration from nature, but feels it’s important to be kind to nature as well.

“It is ‘eco-friendly.’ It’s about being good to the earth,” Villanueva said. “As a designer, it’s not just saying I love nature and want to put plants in a space.”

“It’s really about what’s livable to an area,” Villanueva said. “And that’s what’s fascinating because people respect their city and where they’re living, because it relates to their lifestyle, and that’s a connection to their interior space.”

“Reclaimed wood is just an important concept and I don’t think that’s a trend that will go away because that is a sustainable concept,” said Villanueva, who does projects around the Bay Area and internationally.

“I feel that based on each area, like San Francisco for example, we love the use of local vendors,” Villanueva said. “But in the Philippines, it might be that they use bamboo, or certain woods that are very natural and can only be found in Manila or certain islands in the Philippines.”

“It’s about reconnecting to the sense that Mother Nature gave these beautiful gifts to us and to be outside and to have fresh air is about really creating that sense of serenity in an interior.”

Open Up the Space

Remodeling is definitely an option to consider if the space feels small or cramped. “If there’s a house and it might not have good windows, I’d love to just open up a wall and create sliding glass doors to the outside, and create a little balcony or a little sitting area so you have that indoor-outdoor conversation.”

Even very small spaces can be opened up in a way that makes the room feel spacious and more lighted.

“We vertically expanded that space,” Villanueva said. The bathtub was replaced by a longer glass shower, which allowed the client to have a spa-like waterfall fixture above, and glass sliding doors that helped reflect more light. The cabinet was taken out as well and replaced with a custom vanity and a tray with containers for the necessities.

Sometimes adding a window or taking out a wall isn’t an option. “I would be sure to be very sensitive about the color palette, with the colors and textures, and the lighting—to include pops of green so you have that feeling you’re outside,” she said.

She recommends incorporating colors like whites and greens. “White, because that to me is the pure color of light. White is so crisp and airy, and when I think of airy spaces, I again connect it to the outdoors.”

“Then with lighting, I might just add artificial light to space, like a table lamp, because when you have layers of light in a space, it is so uplifting to the senses that it makes you feel awake in the daytime, and in the night if you have lighting it is so calming and serene, and that feeling of serenity is what I connect with nature.”

“It’s really about creating spaces that uplift the spirit, are refreshing to the soul, and invigorate oneself,” Villanueva said.

“As a designer I do holistic design,” she said. “I don’t just personally love it, but I believe that I can apply that sort of design aesthetic to all of my clients and to any project.”

“Holistic” design includes consideration of all the senses. Beyond the visuals there’s aromatherapy or tactile scents, a soundtrack, or maybe a trickling water feature, layers of textures in the furniture.

“It’s the balance of the spaces and the natural elements, layer upon layer of this melding of textures, but in a way that’s very carefully edited—it’s powerful to the senses,” she said.

“The feeling of serenity is really not feeling like you’re in a crowded room and that you want to get outside immediately because it’s too stuffy, but feeling like you have a lot of air around you, a lot of space to move around,” Villanueva said.

“I feel that in a space that is serene. It’s about having enough breathing room, so you have space to walk,” she said. “If it’s your bedroom, you want to be able to create space on both sides of your bed so you can have that equal amount of flow to get around.”

“If it’s a space for entertaining, I would make sure to not include too much furniture, for you to entertain guests coming through the room, and accessibility to actually enjoy the space and the architecture of the space, rather than just filling it up,” Villanueva said.

“You know it’s enough when there’s a piece in each area of a room that has a function that’s established already,” Villanueva said. “You don’t want to make a space feel overwhelmed in the sense of too many decorative objects, because it takes away from the beauty of the space.”

If the room has too many objects, it’s easy to understand why it feels cluttered or cramped, but having objects or furniture that don’t flow together can cause that feeling as well.

“Limit your patterns to a certain number,” Villanueva suggests. It’s not just about the number of things but the color and texture of the objects as well. “Just have one strong element of design, like a [particular pattern].”

“Dealing with serenity is really about honing in on being able to edit and clearly revise all the design details in an [interior] space,” she said.

“I don’t think about designing spaces for photography, it’s more about connecting with oneself and uplifting the spirit,” Villanueva said.

“For me as an individual and as a designer, I feel like I have an important job to be able to influence the lives of my clients,” she said. “I really feel that it’s about helping them to improve their lifestyle.”