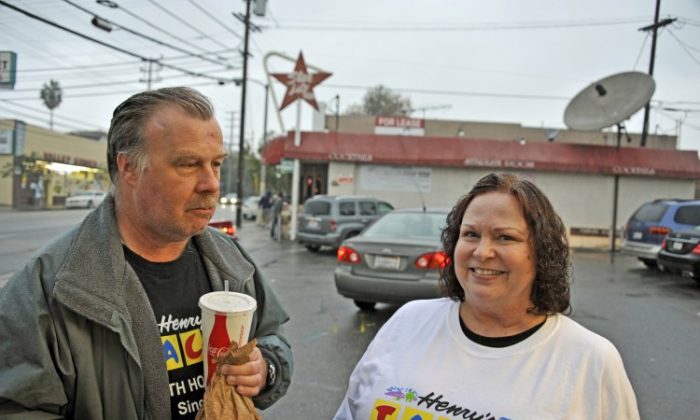 Actor Elijah Wood gives autographs and talks to the crowd. Wood has been eating at Henry’s since his childhood. (Robin Kemker/The Epoch Times)
US

LOS ANGELES—A crowd of hundreds inundated Henry’s Tacos, the historic first “Anglo taco” stand, on Dec. 16, after it was revealed that the North Hollywood restaurant failed to obtain a new lease and would close by the end of the year.

Several Hollywood customers, including stars Elijah Wood, Aaron Paul, and George Lopez, organized a rally to bring attention to efforts to designate the site as a Historic-Cultural Monument or sell it to new owners.

“I first started going here when I was eight or nine years old,” said Elijah Wood. “I lived here; this is where we would hang out.”

After he became involved with acting, he and his fellow performers would go together to eat at Henry’s occasionally. The loss of Henry’s would create a void in history for thousands of customers who have frequented the establishment for the past 50 years.

Henry’s Tacos was established in 1961 by the current owner’s grandfather. In 1967, his son took over. In the early ’70s his daughter, Janis Hood, took over at age 16 and has operated Henry’s Taco since. According to Hood, one of their family members happened to be affiliated with a new national Anglo taco franchise (Taco Bell) and encouraged his relatives to establish their own. It is said that Henry’s Tacos was in business a mere two months before Taco Bell entered the market.

“Henry’s is part of our lives,” said Wood. “This should be preserved for all the people in this community.” Henry’s Tacos is viewed as having cultural and historical value to the community.

The city wanted to help, but did not present the motion to the city council for a vote to declare the property a Historic-Cultural Monument. Los Angeles City Councilmember Paul Krekorian intervened, and persuaded the council not to present the motion.

Wood finally said, “The owner has decided to give up and will close Henry’s Tacos at the end of the year.”

What started as an effort to preserve Henry’s Tacos with a large rally became a rally to celebrate its contribution to the local community.

Early in the afternoon, over 500 people had arrived, swarming around various stars. Aaron Paul, who organized the event, continued to accommodate a long line of rally supporters. A line 2–3 people wide had formed and made its way up the block to the next street. It took over two hours for many to get photos and autographs. Others were just interested in perusing the area and talking with the other celebrities present.

Many supporters were taking advantage of a meal of Henry’s famous tacos from 2–3 p.m., courtesy of comedian George Lopez, who picked up the tab.

Janis Hood said in an interview with The Epoch Times that she doesn’t see any way to prevent the landowner from taking the property back.

“I’m sixty years old, well, really fifty-seven,” said Hood. “I have no family members to help me out here and don’t have the means to purchase the land, so I am calling it quits.”

“I am very sorry to have to announce to everyone that it looks like Henry’s will be closing for good on December 31. As some of you know, Henry’s is just too much for me as a single, childless woman approaching 60 with no family within 1700 miles. I have had several prospective buyers committed to continuing the tradition, but all have been turned down by the landlord. The current prospective buyers have agreed to all the landlord’s terms, but he has ceased communicating with them. Therefore, I have given my notice and it has been accepted by the landlord.

“I believe this all goes back to my unwittingly angering the landlord by nominating Henry’s for Historic Cultural Monument status. As Council member Krekorian put a stop to that, the landlord may want to bulldoze Henry’s and build something else. I am hoping to get some media coverage in the next few days. Needless to say I am heartsick that after 51 years, Henry’s may end for no good reason. Thanks to you all for your support.”

Maybe it is time for the community to go over and buy a good meal, before it disappears. This would also help the owner and her “special employees,” as she calls them, while they can still work.