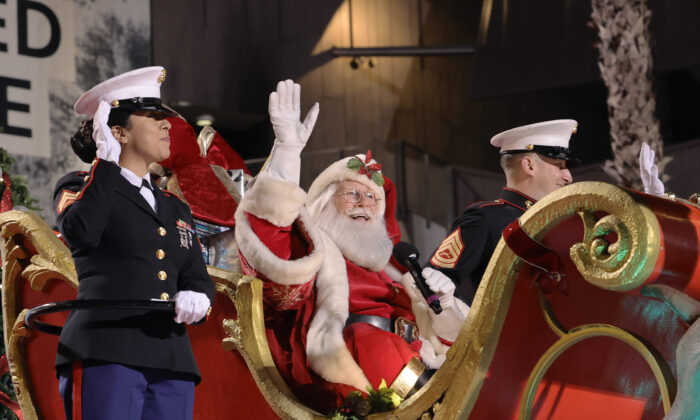 HOLLYWOOD—After a hiatus in 2020 because of the pandemic, the Hollywood Christmas Parade returned Nov. 28, moving through the streets of Tinseltown with its 89th edition to mark the unofficial start to the holiday season—though one still being celebrated in the shadow of COVID-19.

Musicians Marilyn McCoo and Billy Davis Jr. of The Fifth Dimension were among the 61 celebrities and VIPS scheduled to take part, along with actors Danny Trejo, Tom Arnold, and Lou Ferrigno, as well as Jerry Mathers and Tony Dow from the 1957–63 CBS and ABC comedy, “Leave It to Beaver.”

There were also 49 movie and television cars, including “Back to the Future” DeLoreans, the “Ghostbusters” Ecto-1, “Smokey and the Bandit” Trans-Am, the “Munsters” coach, the “Rockford Files” Firebird and the “Magnum, P.I.” Ferrari.

The parade concluded with an appearance by Santa Claus along with his reindeer.

The parade has been held every year since 1928, except from 1942 to 1944 due to World War II and last year, when it was canceled because of the pandemic.

The Hollywood Christmas Parade was first held in 1928, when it was called the “Santa Claus Lane Parade.” Comedian Joe E. Brown was the first grand marshal in 1932—a role later filled by such luminaries as Bob Hope, Gene Autry, and Jimmy Stewart.