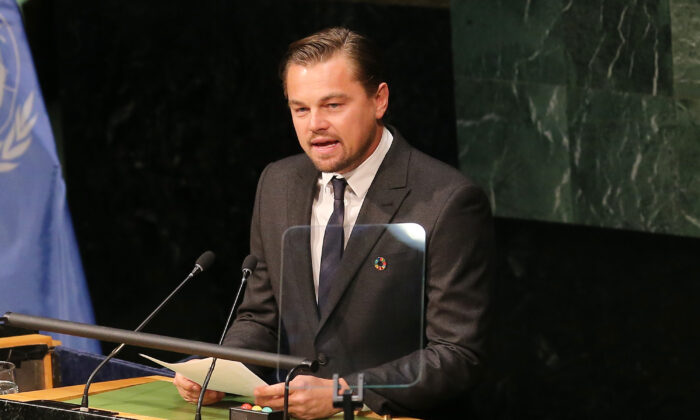 Actor Leonardo DiCaprio speaks during the signing of the Paris Agreement on climate change at the United Nations in New York on April 22, 2016. (Jemal Countess/Getty Images)
Viewpoints

Rex Murphy: Hollywood Cause-Merchants Should Keep Their Noses Out of Issues They Know Little About

Celebrities, from the C-list to the A-list, have been infesting politics for half a century now. Various halfwits and noodleheads have convinced themselves that because they lucked out in the entertainment lottery, landed a slot on some spin-off soap opera, or because their vulgar howlings won them a Grammy or its so-low-rent equivalent, a Gemini, or stole a moment of the “big time” in Vegas or Hollywood, that their burst of luck or happenstance and the odd appearance on Entertainment Tonight means they have “something to say” to the world.

There are various motivations for the dumb celebrity to pontificate on world issues, decide to “support” some cause, show up at U.N. misery conclaves, and offer their star-studded, coddled, over-jewelled, botoxed, mammary-enhanced personas to the cause of the moment.

In the old days such cleavage-scientists as Brigitte Bardot, the spandex queen Jane Fonda, lesser amplitudinous sex-kittens gave themselves to “saving the seals,” offering support to North Vietnam, or the perdurable missions of “ending imperialism, capitalism, colonialism, sexism—any “ism” which the moment nominated as worthy for a protest, except of course the one ism which most defined them: idiotism. Which, roughly translated, can be understood as confusing the consideration that you did an interview with Oprah, or wrote a book that Barbara Walters thought she could read with intellectual certification. That showing up on the cover of People, or being featured on TMZ, promoted the beneficiary into a “voice” the world must hear and hear again.

The other motivation is the always present one of Preserving the Career. The B- and C-list crowd, once their brief fame on Saved by the Bell gets weather-worn, or that time you had three weeks on the top 50 songs, or those glory days as cast-member “8” on Star Trek season one have retreated into only the oldest of memories—this bunch pathetically turn to something, anything, that will get them another burst in front of a camera, any camera; the 6 a.m. morning show on a college radio, or a fuzzy photo on the front page of the various subway handouts. They can’t give up. And if marching for diabetes, screaming outside some building about the logging industry, or living in a tree for months is what it takes to get another “fix,” they’re on it.

Fame, once tasted, even a morsel of the stuff, consumes the consumer, fires an appetite that cannot be subdued, and will have its victims pander whatever tiny talent they may have in a remorseless journey to taste it again.

Causes are the place where lost actors go. And in the last three or four decades the phenomenon has metastasized. Remember those embarrassing concerts to Save the Children, End World Poverty, We Are the World, where every preening pop star in the world did a gang-song—maudlin, trite, badly-rhymed, and terminally saccharine: did they (a) save the world, (b) end world poverty, (c) bring on world peace? Of course not.

The cause was not the impetus. The impetus for these was to put on a spectacular display of how kind and sweet and caring and wide-hearted these very great humanitarian millionaires were. It was for the world to see them, far more than it was for them to even pretend to save the world.

Lately of course, the cause of causes, the ignis fatuus (fire of fools) of our day is the global warming apocalypse. For 30 years now there has been an unstoppable hurricane of blather, hysteria, and alarmism that the one resource that maintains our entire modern civilization—oil—is cascading the planet to its doom. Jeremiads from the apocalypse fanatics rain down by the hour. It has infested the minds of every progressive, dragged economies into fracture, and bewitched the soft minds of a million politicians.

The number one celebrity, the paragon of Hollywood cause-merchants, is Leonardo DiCaprio.

DiCaprio, who expends a carbon-budget greater than the whole of Spain, who luxuriates on yachts the size of pre-war Austria, and travels it seems everywhere by private jet, even to the grocery store, has lent his immense celebrity to this most fashionable of crusades.

He deplores Fort McMurray. He inserts himself into protests on the West Coast of Canada. He joins the massive throngs which descend like locusts on the capitals of the world every year—those called the U.N. Conference of the Parties—there to bewail the noxious influence of carbon dioxide, the source of all plant, animal, and human life. Does he know what he exhales?

He is the savant who identified the Alberta chinook as “proof” of global warming, an assertion of meteorological idiocy that would embarrass even Al Gore. Just in passing it is worth noting he has succeeded the great Bono of U2 as the fame-token of every global mob gathering of the unbelievably rich and even more incredibly boring. He knows as much about the British Columbia economy and the politics of First Nations as you would expect from a person who gave a sermon on “greed” at an Academy Awards dinner (the old Bishop in the Cat House meme), and whose political judgement brought him to support John Kerry as a candidate for U.S. president.

Mr. DiCaprio, as said, is top of the pile of those who conflate tinsel fame with specialist authority, and a life of unexampled luxury and privilege as a licence to shill. Let us recall that it is the spotlight that illuminates, not the dull object beneath it visible only from borrowed light.