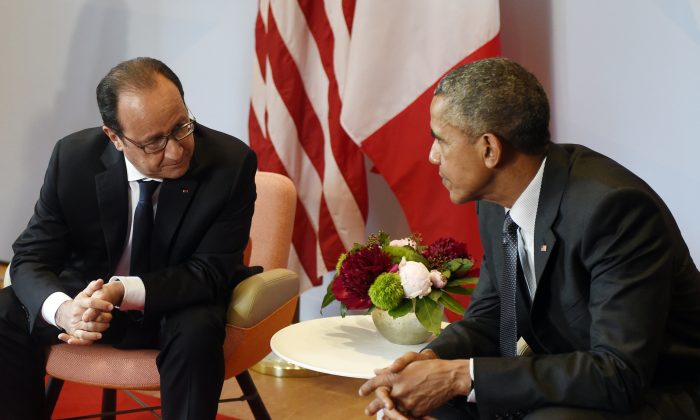 US President Barack Obama (R) and French President Francois Hollande take part in a bilateral meeting on the sidelines of the G7 Summit at the Schloss Elmau castle resort near Garmisch-Partenkirchen, in southern Germany on June 8, 2015. (Alain Jocard/AFP/Getty Images)
International

Hollande to Press Obama on Russia Cooperation in ISIS Fight

WASHINGTON—President Barack Obama will stand in solidarity with French President Francois Hollande at the White House on Tuesday, 11 days after the Islamic State (ISIS) launched a series of deadly attacks in Paris. But Hollande is likely to leave Washington without firm backing for his call to bring Russia into a new coalition to fight the extremists.

Hollande’s visit to Washington is part of a diplomatic offensive to get the international community to bolster the campaign against ISIS extremists. The group is believed to have been behind the Nov. 13 attacks that killed 130 people in Paris, as well as separate attacks in Lebanon and Turkey and the downing of a Russian airliner in Egypt.

As ISIS expands its reach outside its bases in Syria and Iraq, Obama is facing increased pressure at home and abroad to ramp up U.S. efforts to destroy the extremists. So far, Obama is resisting calls to either change or significantly ramp up his approach, and instead is focused on getting other countries to offer more counterintelligence, humanitarian and military assistance.

“The United States is certainly pulling more than our own weight,” White House spokesman Josh Earnest said. “And we believe that there is more that can be done if countries are willing to contribute additional resources.”

The U.S. campaign has centered largely on launching airstrikes, while training and assisting security forces on the ground in Iraq. Efforts to train and equip moderate rebel groups in Syria have struggled, though Obama has authorized the deployment of 50 special operations forces to the country to jumpstart the program.

France has stepped up its airstrikes following the Paris attacks, relying in part on U.S. intelligence to hit targets in Raqqa, ISIS’ stronghold in Syria. British Prime Minister David Cameron said on Monday he would seek parliamentary approval this week for Britain to begin airstrikes as well.

Last week, Hollande called for the U.S. and Russia to set aside their policy divisions over Syria and “fight this terrorist army in a broad, single coalition.” But his office acknowledges that “coordination” sounds like a far more realistic goal.

“We are not talking about a command center. We are talking about coordination of methods and exchange of intelligence,” a French diplomat said on Monday. The diplomat wasn’t authorized to publicly discuss the subject and spoke on condition of anonymity.

Earnest said the U.S. would “continue the conversation” with Putin but suggested Obama would make no promises to Hollande during Tuesday’s visit.

The talks seemed certain to be complicated by Turkey’s shoot-down of a Russian warplane Tuesday, claiming it had violated Turkish airspace and had ignored repeated warnings. Russia said the SU-24 was downed by artillery fire, but Turkey claimed that its F-16s fired on the Russian plane. The Russian Ministry of Defense said the plane was over Syrian territory “throughout the flight.”

From Washington, Hollande will travel to Moscow for meetings with Putin.

Beyond their discussions on military cooperation, Obama and Hollande are expected to discuss diplomatic efforts to achieve a political transition in Syria. The U.S. and France support a transition that would lead to the departure of Assad, who has overseen a civil war in his country that created a vacuum for ISIS group to thrive.

While Russia is backing a new diplomatic effort in Syria, Moscow still refuses to support steps that explicitly call for removing Assad from power.

The quagmire in Syria has dragged on for nearly five years, and criticism of Obama’s strategy appears only to grow louder.

“I don’t think the approach is sufficient to the job,” Feinstein said on CBS’ “Face the Nation.”