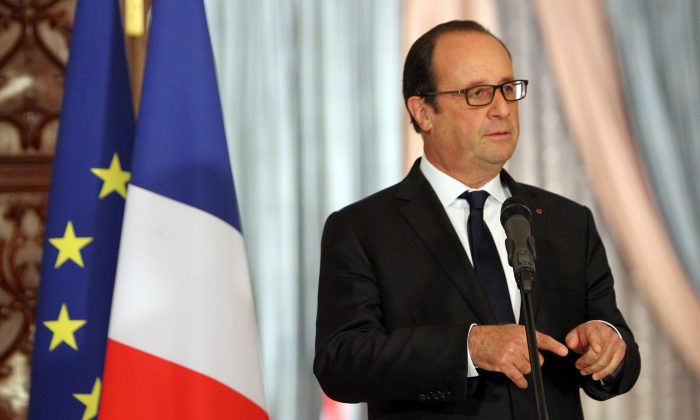 ATHENS, Greece—French President Francois Hollande is heading to Athens Thursday for a two-day visit, as Greece seeks help from European rescue lenders for relief on its massive bailout debts.

Hollande, joined by French business executives and Finance Minister Michel Sapin, was due to arrive later.

France is seen in Athens as being more sympathetic than lead bailout lender Germany toward its effort at negotiating more lenient repayment terms.

After an expected dip back into recession this year, Greece’s debt is expected to rise above 190 percent of its annual GDP in 2016.

Left-wing Prime Minister Alexis Tsipras has credited the Hollande administration with helping Athens reach a third international bailout agreement this summer that avoided a potentially chaotic exit from the euro currency, which Greece shares with 18 other countries.

“That discussion is in the past,” Hollande said in an interview published Thursday in the Athens daily Kathimerini. “Europe has rules and they have to be respected, they are linked to the stability of the euro. But the consolidation of public finances cannot be an end in itself. Europe must move toward investment.”

Greece and France have annual trade of some 2.8 billion euros ($3.2 billion), with French exports worth more than three times more than the country imports from Greece. French company investments are widespread, include in energy, defense, and pharmaceuticals, providing some 12,000 jobs in Greece.

Hollande’s visit coincides with another inspection being carried out by bailout negotiators in Athens, before they agree to back new loan payouts and a big capital injection into the country’s banks, which have been crippled by strict money controls since late-June.

The two sides are at odds over how to tackle Greece’s growing pile of bad loans, worth more than a third of the total.

“They are doing a certain number of reforms. In exchange for these reforms we will give them money — first 2 billion euros and then 1 billion euros,” he told France’s Europe 1 radio.

“Then we will examine their program and in November or December, more likely November, we will deal with the recapitalization of the Greek banks … and the Greek debt.”

Some 2,500 police officers will provide security during the French president’s visit, with the bulk of Hollande’s meetings scheduled for Friday.