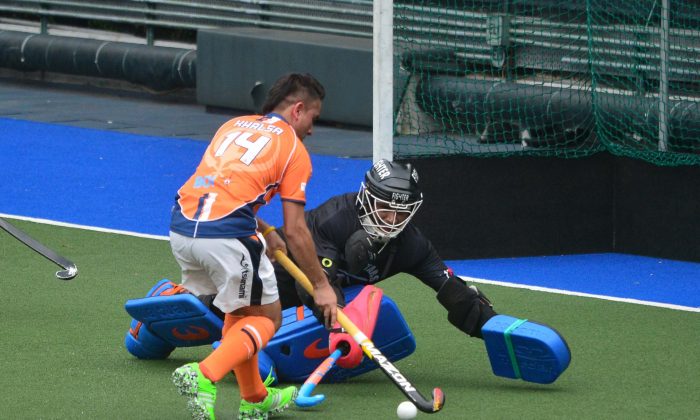 Khalsa's Inderpal Singh goes on to score two goals for his club in the Holland Cup semi-final against Pakistan Association at King’s Park on Sunday May 8, 2016, when he rounds the keeper not once but twice. (Eddie So)
HK Hockey

Field Hockey
By Eddie So

HONG KONG—Newly crowned Premium Champions Khalsa-A have a chance to add another trophy to their mantle after they bagged bragging rights with their 8-2 semi-final demolition of Pakistan Association-A at King’s Park last Sunday May 8.

Pakistan Association had literally run out of steam under hot and humid skies despite scoring the opening goal minutes into the game. The goal came from a tremendous attacking run that saw teen Farman Ali make a spectacular drive providing Khalsa’s goal tender no chance of touching of the ball as it hurtled into the bottom corner of goal. But Khalsa hit back and took control as the game progressed.

The win sets the ball into motion for a crack at Singh Shaba Sports Club-A (SSS-A) in next Sunday’s final, as they saw off a spirited Hong Kong Football Club-A after leading 3-1 at the break. Club missing many senior players fought back to almost achieve the ‘comeback of the season’ but eventually lost 4-3.

“We were missing 10 first team players unavailable through work commitments or injury. Our team today was composed mainly from the club’s B’s and C’s to ensure we could mount a competitive challenge. But what can I say today, the better side won, we did not have the players and the ones we did have took up the roles as best they could, and I am proud of the display they showed today,” said HKFC-A coach Koen Pijpers, former Dutch international.

Getting back to the earlier game, despite the initial setback and the many forays deep into Khalsa-A territory, the boys in green failed to extend their lead as Khalsa slowly but surely dribbled their way through the Pakistan defenses before coming away with an equalizer midway through the first half. Arshad Mohammad, the scorer of the equaliser, eventually went on to score a brace in their 8-2 win.