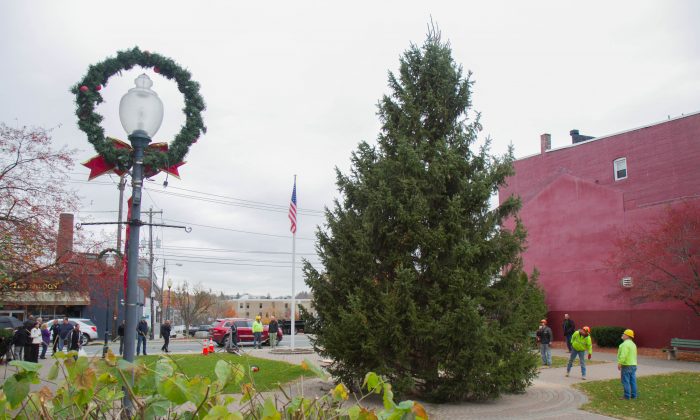 MIDDLETOWN—The timing of the rain could not have been better for the arrival of the tree in Middletown’s Festival Square on Nov. 10—the rain held off just until after the tree was installed.

The 30-foot spruce arrived around 10:30 a.m., directly from the home of the Levi family in Scotchtown.

Scott Levi, the son of Mr. and Mrs. Levi, works as a bartender at Nina restaurant and bar, right next to Festival Square. He saw the Business Improvement District’s sign asking for the donation of a 30-foot tree in front of City Hall and thought of his parents whose tree was growing into a neighbor’s yard and needed to be cut down.

“They just kept letting us know that they were interested in the tree and at a point they told me that it was between that tree and one other tree,” he said. “We just kept getting more and more excited, then eventually they called my mother to tell her they’re going to take our tree.”

One of the chains broke while they were loading it onto the truck, said one of the workers from the Department of Public Works who was there, but the rest of the installation at festival Square went smoothly.

The tree had to be hoisted by a crane and sawed down at the trunk to fit in the 14 inch by three-foot deep hole in the middle of Festival Square.

Maria Bruni, the director of Community Development in Middletown, said she was excitedly looking forward to the tree-lighting ceremony on Nov. 27 and thanked the people who donate their trees to the city every year.

“Every year just gets better, taller, bigger; the trees are now fuller,” she said.

The tree will be strung with lights by volunteers from the International Brotherhood of Electrical Workers (Local 363) on Nov. 21 followed by a tree lighting ceremony and holiday parade on Black Friday, Nov. 27.

John Degnan, the director of the BID, said the tree would have about 2,500 multicolor LED lights on it and this year, a new star. “That’ll be an added attraction,” he said.

The arrival of the tree marks the start of a series of downtown Middletown holiday events called the Heart of Downtown. These include free movies at the Paramount Theater, a Jimmy Sturr Holiday concert and a Heart of Downtown Photo Contest by Epoch Times and the City of Middletown.