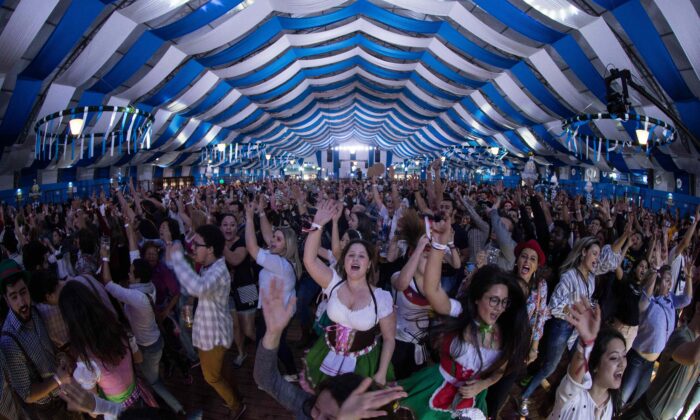 Brazil is readying itself for a return to festivals after an almost two-year ban on mass gatherings.

In the state of São Paulo, Brazil, pandemic restrictions on events ended on Nov. 1, marking a return to festivals after an almost 600-day ban on large public assemblies.

There are dozens of events and trade shows already scheduled for the final months of 2021, including highly anticipated affairs such as the F1 Grand Prix, Oktoberfest, and the large Christmas village of Villa de Natal.

However, to attend, participants must wear a face mask and either be fully vaccinated against the CCP virus or provide proof of at least one vaccine dose along with a negative PCR test within 48 hours of the event.

For many, this is an acceptable price to pay for a return to pre-pandemic festivities.

More than 70,000 people are expected to attend Oktoberfest, which employs 2,200 technical experts, 400 gastronomy professionals, and around 500 other personnel in areas such as security and sanitation.

“An event of this size will move the economy of São Paulo and the country,” Filho said.

The CCP (Chinese Communist Party) virus, the pathogen that causes COVID-19, has killed 608, 235 people in Brazil, which is the nation that also has the highest reported caseload in Latin America. A pandemic response was initiated in 2020, and the subsequent restrictions fueled high levels of unemployment and inflation throughout the country.

“The entertainment area was one of the most affected by the COVID-19 pandemic,” Filho said.

Filho’s Oktoberfest event has generated more than $7 million for the city’s economy in 2019.

For small-business vendors such as Alma Martins, the reinstatement of public events is an important part of economic resuscitation.

“Things have been tough everywhere for business owners, especially ones who count on big events [for income],” Martins said.

She is planning to operate a restaurant booth at Villa de Natal.

As for the “pay to play” requirement of vaccination to take part in public events, Martins doesn’t think that it will be a deterrent for participants.

“Just about everyone [in São Paulo] has at least one dose already, and people are excited to celebrate this holiday [season] with family and friends,” she said.

São Paulo has among the highest vaccination rates in the country, with 100 percent of its 65 and older population having been vaccinated against the CCP virus.

Brazil has immunized 55.3 percent of its total population against the virus, with a total of 263,777,530 doses having been administered by Oct. 29, according to the World Health Organization.

“Nobody is waiting to celebrate this year. The virus remains, but so do we. My family and I plan to do many things [for the holidays] including Villa de Natal,” Alphaville, Brazil, resident Maria Sousa said.

Despite the general air of excitement surrounding the November and December lineup of activities, some residents aren’t happy about the requirements to enter.

Santa Cecilia, Brazil, resident Alvaro Fernandez had been looking forward to the Formula 1 Grand Prix, but was faced with a hard decision when attempting to purchase tickets.

“I was told, point-blank, a PCR test [alone] wasn’t going to cut it,” Fernandez told The Epoch Times. “I mean, I’m all for safety and trying to suppress the virus, but now we’re required to have at least one dose of the vaccine [to attend events]?

“What’s wrong with just asking people for a PCR test?”

Despite the entry requirements, Filho said the return to large-scale events is necessary because they celebrate the friendship between people while offering joy, music, typical cuisine, and culture.

“They’re needed for the people who were practically isolated and without entertainment for a year and eight months,” Filho said.

The office of the mayor of São Paulo didn’t respond to a request for comment by press time.