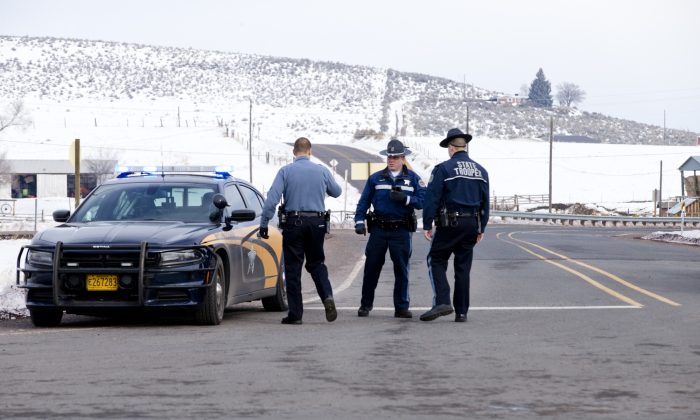 Oregon State Police man a roadblock at the intersection of highways 395 and 20 outside of Burns, Ore., Wednesday morning, Jan. 27, 2016. (Dave Killen/The Oregonian via AP)
US

Holdouts in Oregon Siege Offer to Leave If None Are Charged

BURNS, Ore.— One of the last holdouts in the armed takeover of an Oregon wildlife refuge said Thursday the remaining five occupiers will leave if they receive assurances none of them will be arrested.

In a video posted on the YouTube channel “DefendYourBase” that the group has been using to issue updates during the nearly 4-week-old siege, a speaker believed to be David Fry said the occupiers have been told by authorities that “out of five people left here, four of us are allowed to leave.”

The FBI had no immediate comment on the demand. It has said only that it is trying to “empty the refuge of the armed occupiers in the safest way possible.”

The FBI has set up checkpoints around the refuge that was taken over on Jan. 2 by ranchers and others demanding the federal government turn public lands over to local control.

The group’s leader, Ammon Bundy, and 10 others have been arrested over the past couple of days, most of them in a traffic stop Tuesday night that erupted in gunfire and left one follower dead.

Fry has been posting frequent online updates from the Malheur National Wildlife Refuge. In the video, a speaker whose face was not visible said an FBI official told him one of the remaining occupiers faces a felony count of conspiracy to impede federal officers from carrying out their duties through force, intimidation or threats.

That’s the same charge 11 people already arrested in connection with the occupation face.

The spokesman said he doesn’t think the individual still at the camp should face charges because he had limited involvement in the standoff.

“We are willing to stay here” unless authorities agree not to charge anyone, the voice on the video said.

On Wednesday, three other members of an armed group surrendered to authorities after Bundy issued a statement urging his followers to end the standoff. “Please stand down. Go home and hug your families. This fight is now in the courts,” he said.

Meanwhile, Bundy followers gave conflicting accounts of how Robert Finicum, a spokesman for the group, died in the confrontation Tuesday night on a remote highway.

One said Finicum charged at FBI agents, who then shot him. A member of the Bundy family said Finicum did nothing to provoke the agents.

Raymond Doherty, an Oregon man who said he witnessed the clash, told Portland TV station KOIN that he heard about a half-dozen shots over 12 to 15 seconds and couldn’t see exactly who was shooting. But he added: “I saw them shooting at each other.”

FBI agent Greg Bretzing defended the FBI-led operation: “I will say that the armed occupiers were given ample opportunities to leave peacefully.”

Finicum’s daughter called him a martyr.

Bundy is the son of Nevada rancher Cliven Bundy, who was involved in a tense 2014 standoff with the government over grazing rights.

The group came to the frozen high desert of eastern Oregon to decry what it calls onerous federal land restrictions and to object to the prison sentences of two local ranchers convicted of setting fires.

In a criminal complaint unsealed Wednesday, federal authorities said the armed group had explosives and night-vision goggles and was prepared to fight.

The charges against Bundy and others say that the refuge’s 16 employees have been prevented from reporting to work because of threats of violence.