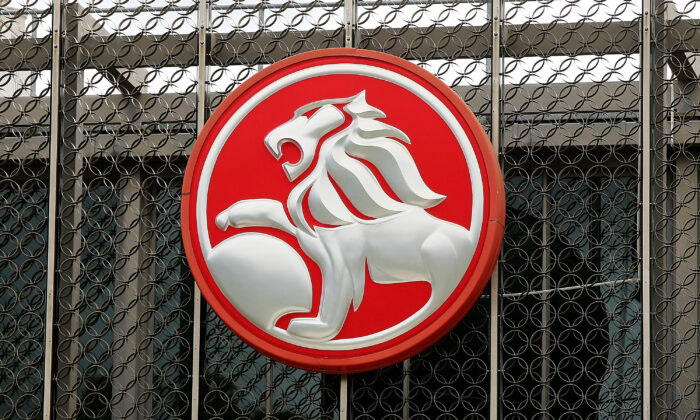 A general view shows the Holden branding at the entrance of the Holden manufacturing facility in Elizabeth in Adelaide, Australia on Dec.11, 2013. (Morne de Klerk/Getty Images)
Viewpoints

The post-World War II era was a golden age for Australia. Australians were united around their shared values, including democracy, egalitarianism, free speech, and the fair go—along with widespread economic growth and prosperity.

This period gave birth to what cannot be called the Australian “dream” because it was so widely attained: owning a home in the suburbs and raising a family in “frugal comfort.”

This was a time of optimism for the future, perhaps best captured on Nov. 29, 1948, when the first commercially held Holden rolled off the assembly line at Fishermans Bend in Port Melbourne.

The Holden was “Australia’s own car.” The first car “made in Australia, for Australia,” and as described by then-Prime Minister Ben Chifley was a “beauty.”

This week marks the 73rd anniversary of that first Holden, and it’s worth reflecting on what the first domestically produced commercial vehicle symbolised about Australia.

The Holden was more than a car. It was an emblem of national success. The parent company of Holden, General Motors, stated at the time that “the manufacture of a car is the greatest industrial stride Australia has made since the production of steel was introduced in Newcastle in 1915.” And that the start of car manufacturing “will go down as a milestone in Australia’s history.”

After World War II, hundreds of thousands of migrants fled war, racial division, political instability, and poverty to work on the assembly line of one of the many factories popping up across the country.

For Australians, access to the dignity of work, especially in the manufacturing industry, regardless of their cultural background, skill level, or their family’s last name, made Australia an egalitarian worker’s paradise.

And Holden captured the spirit of the age. In 1955, when the one-millionth post-war migrant arrived in Australia, close to 50 percent of the then 5,400 Australians directly employed by Holden were migrants from 38 different countries.

While true that the domestic car manufacturing industry may have been predicated on a number of unsustainable policy settings, it showcased Australia’s “go ahead to get ahead” commercial spirit, driven by an attitude that Australians could achieve anything.

More broadly, manufacturing shaped the kind of society Australia had. It was characteristic of the age that when Prime Minister Robert Menzies campaigned using his “Australia Unlimited” slogan ahead of the 1958 election, he highlighted the production of iron, steel, and household white goods in the private sector as markers of our success.

However, there has been a change in Australia promising economy, and that has been the primary factor driving that change is the decline of the manufacturing industry and the kind of jobs it provides.

Manufacturing jobs are overwhelmingly full-time and well-paid, with over 83 percent of all work positions in the industry operating full-time, which is well above the economy-wide average of 68 percent. The average annual salary in the industry is also approximately 10 percent above the national average.

But conversely, the industries which are expanding the fastest in Australia are increasingly those which offer low-paid, part-time, unstable, and precarious employment opportunities.

Research by the Institute of Public Affairs has documented that since the year 2000, some 43 percent of all jobs have been created in industries that are in the lowest third of employee pay, while more than half of the jobs created were part-time.

The transition from a factory economy to an “app-economy” has most acutely affected young Australians, the low-skilled, and recent migrants.

As noted in a recent paper by two economists from The University of Melbourne published in The Australian Economic Review, “extra labour market supply from young immigrants has been concentrated in low-skill part-time jobs in retail and accommodation and food services industries.”

The same is true of young Australians. As noted in a recent study by the Productivity Commission, ‘Why Did Young People’s Incomes Decline?’ university graduates aged under 35 were more likely to have an inferior job in 2018 than they were in 2001.

Increasingly, young Australians are finding that they are over-qualified, underemployed, and underpaid.

The lack of access to the kind of stable, full-time, and well-paid employment offered by the manufacturing industry presents a significant challenge to the future of the Australian way of life.

Homeownership, starting a family, participating in the local community, and having hope that your children will have a better life than you do is all predicated on having access to decent employment.

Manufacturing is critical to Australians having a stake in the economy, in their future, and in their local communities.

Ultimately, the economic and cultural issues associated with the decline of the manufacturing industry will expose political division which exist in Australia and that have been exacerbated by the coronavirus lockdowns.

A large and growing number of Australians are becoming disaffected and no longer believe that the central institutions of our society—big business, government, the public sector, media, and universities—reflect their interests, aspirations, or concerns.

On the anniversary of that first “beauty” rolling of the production line, it’s worth reflecting on how we can rebuild a domestic manufacturing industry. Because who we are and how we live is intimately tied to what we do.

Cian Hussey
Contributor
Follow
Cian Hussey is a Fellow at The Centre for the Australian Way of Life at the Institute of Public Affairs, and the Managing Editor of Essays for Australia.
Website