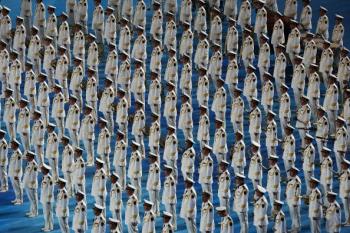 Let’s Hold the Next Olympics in North Korea!

Gerald Lewis
biggersmaller
Print
Sure, why not? The IOC seems intent to “do their bit” for the betterment of humanity by holding the Olympics in countries with oppressive regimes such as China's. Why not go the whole hog and do them all—North Korea next, maybe Zimbabwe could host the 2016 Games and perhaps hand it on to Cuba for a great show in 2020.

There won't be total press freedom, but, oh well, there wasn't in Beijing and the IOC didn't seem too worried about it. In fact there was a tank parked outside the main press centre. And when ITN's John Ray got roughed up the IOC said they hope it won't happen again. It happened again of course, this time to two AP photographers. Here's what the IOC spokesperson said: “I say clearly on behalf of the IOC that we would not want to see that happen again.”

There won't be freedom of speech or demonstration, but there wasn't in Beijing either. In fact, the dissenters who weren't rounded up pre-show, were ferreted out and herded up using “Protest Parks”. The IOC didn't seem to mind too much about that either. IOC spokesperson Giselle Davies said they hoped the parks would be used “genuinely.”

That's OK though, because the IOC says it can't interfere with the sovereignty of another country. It doesn't even seem to want to “interfere” when six US citizens are locked up for 10 days for protesting about Tibet.

What the IOC does say is this: "Placing sport at the service of mankind and leveraging Olympic values to promote better understanding between people, nations and religions stands at the core of our mission."

Old Rogge pulled that comment out of the bag on the final day of the Olympics in Beijing. Love to hear what he says about the religious persecution of Falun Gong practitioners and Christians in China, and what about those monks in Tibet. I wonder if he has talked to any of these groups himself—just to help that promotion of understanding.

I bet the North Koreans would be a bit more smart about faking their gymnasts ages. They would have learned from the '90s when one of their gymnasts was 15 for three years running. Also, I reckon their surveillance systems are already top-notch and they can always borrow China's weather rockets if rain is imminent.

Hu Jintao and Dear Leader could chat about the finer points of how an authoritarian dictatorship can pull the wool over the West's eyes and hold the biggest fake “coming out party” in history.