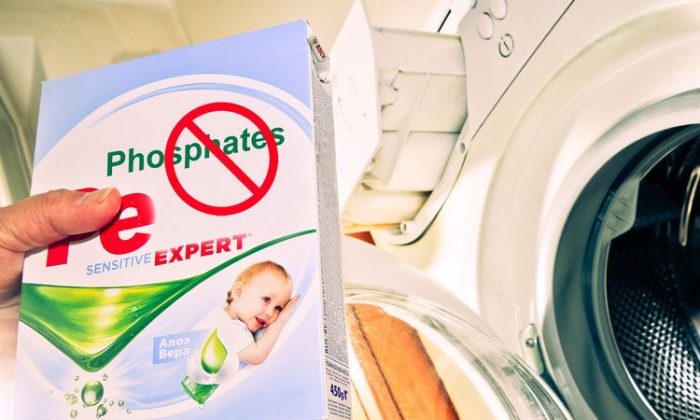 KYIV, Ukraine—Soon, the European Union will phase out the sale of detergents containing phosphates—chemicals known to be harmful to human and environmental health. However, just on the outskirts of Europe, big international manufacturers are still finding markets for the banned chemicals in countries like Ukraine.

According to the Ukrainian non-governmental environmental organization MAMA-86, about 98 percent detergents sold in Ukraine contain high levels of phosphates, surfactants, and other dangerous chemicals.

In the 1980s and 1990s, many European countries started passing regulations to limit or prohibit the use of phosphates in detergents. In Italy, Austria, the Netherlands, Norway, Switzerland, and Germany they are already prohibited. Great Britain, France, and Spain restricted phosphates to 12 percent of detergent ingredients.

Once the new law comes into effect, the amount of phosphates in detergents sold in the EU will be limited to 0.5 percent. Laundry detergents will be off the shelves first, by June 30, 2013, followed by phosphate-filled dishwasher detergents in January 2017.

However, the major manufacturers have not reduced the amount of phosphates in their products sold to countries that have no restrictions.

“As businesses, they have an interest in not discarding their technologies, so they want to find a good market for them—and they’ve found it in Ukraine, Russia, Belarus,” says Denys Pavlovskyi, an expert on chemicals with Mama-86.

“In the past, when legislatures abroad allowed it, their machinery produced phosphate-containing products. Accordingly, when they installed non-phosphate producing equipment, in order to keep the old machines, they transferred them to countries where laws don’t prohibit it,” adds Pavlovskyi.

Procter & Gamble’s Tide washing powder sold in Ukraine, for example, contains more than 12 percent phosphates, according to a 2006 report prepared for the United Nations Development Program.

The Epoch Times sent a request to P&G asking why there was a difference in ingredients sold in Ukraine compared to the EU, and whether the company plans to stop using phosphates in its washing powders sold in Ukraine. P&G did not respond to the request.

Ecologist and activist Anastasia Kostenko is working to increase awareness among Ukrainians about these issues and why they should avoid phosphates.

She says phosphates and surfactants cause allergic reactions. In particular, phosphor compounds that come into contact with skin can penetrate into the blood stream and change the percentage of hemoglobin and protein. In the environment, a buildup of phosphates in water leads to the growth of microorganisms, specifically blue-green algae—a phenomenon called eutrophication or green scum that kills other plant and animal life.

“I live in Obolon [prestigious district in Kyiv near Dnipro River] and for three years it has been impossible to swim here. The water is so bad, that it’s disgusting even to dip your foot in it,” says Kostenko.

The local waterworks also reported seeing an impact from phosphates. Viktoria Yakovleva, a representative of Kyiv-Waterchannel, the company responsible for treating and supplying the capital’s drinking water, says that previously, they were seeing only 8 mg of phosphates per liter of discharged water, whereas now there are seeing 25-27 mg.

She says that phosphates kill microorganisms that naturally clean the water. To compensate for the loss, they must pump in oxygen.

“It has huge costs in terms of energy—60 percent of the total electricity we use, goes towards pumping oxygen,” says Yakovleva.

Ukrainian authorities have pledged to solve the problem. Starting in 2013, technical regulations will come into effect that will oblige manufacturers to indicate the percentage of phosphates in their detergents, which is currently optional.

Until the new law is approved by government and goes into full force in 2020, Ukrainians who wish to buy detergents without harmful phosphates and surfactants, must seek them out themselves.

There are now several small companies offering phosphate-free cleaners, mostly for sale over the Internet. These green producers estimate that they represent about 2-3 percent of the market, which means they are still far from displacing the big multinationals that dominate the market like P&G and Henkel.