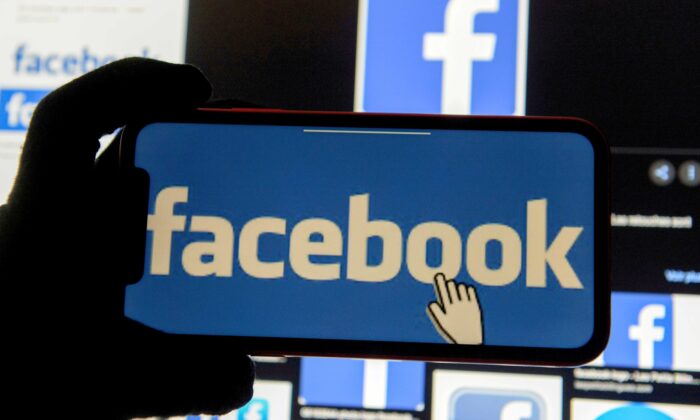 The Facebook logo on a mobile phone in a picture illustration taken on Dec. 2, 2019. (Johanna Geron/Reuters)
Judiciary

The Supreme Court heard the case known as Facebook Inc. v. Duguid telephonically. While one hour was allotted for oral argument, Chief Justice John Roberts allowed the Dec. 8 hearing to go on for 83 minutes.

Although President Donald Trump has been a fierce critic of social media companies, accusing them of political bias and heavy-handed tactics against conservatives and his reelection campaign, in this case, the Trump administration sided with Facebook, as did a phalanx of large corporations such as Home Depot Inc. and Quicken Loans LLC, which filed briefs in support of Facebook’s position, claiming they have been sued in similar lawsuits.

The case concerns a federal law that imposes penalties of up to $1,500 for each unwanted call or text. The prohibition on such calls applies to dialing systems that can “store or produce telephone numbers to be called, using a random or sequential number generator.”

To deal with a growing volume of telephone marketing calls, in 1991, Congress enacted the Telephone Consumer Protection Act (TCPA), which “restricts the making of telemarketing calls and the use of automatic telephone dialing systems and artificial or prerecorded voice messages,” according to the Federal Communications Commission (FCC). The rules apply to telecommunications companies and other marketers.

Noah Duguid, a plaintiff suing Facebook who wants his lawsuit to become a class action, argues that what he considers to be the company’s permissive interpretation of the TCPA would expose the public to a tsunami of robocalls. Duguid says he was besieged by texts from Facebook in 2014 advising him of an attempted log-in, even though he didn’t have a Facebook account. Facebook denied responsibility, saying Duguid probably had a recycled phone number that used to be associated with an account.

Facebook is appealing the decision by the U.S. Court of Appeals for the 9th Circuit, which rejected what it called “Facebook’s challenge that the TCPA as a whole is facially unconstitutional.” Facebook had argued that restrictions on its ability to communicate infringed the First Amendment to the U.S. Constitution and that companies could be held liable for huge damages for relatively minor violations of the law.

During oral argument, several justices seemed to think the language of the TCPA was ambiguous and that the law, enacted before cellphones were widely used and before Facebook was created, had been rendered obsolete by technological progress.

Facebook attorney Paul D. Clement told the justices that Duguid’s reading of the TCPA “creates a statute of impossible breadth.”

Clement said the other side had stretched the rules “of ordinary grammar and statutory construction” so there “becomes so much play in the joints that you essentially empower the judiciary to rewrite statutes.”

Bryan A. Garner, attorney for the respondent, told the justices that consumers benefit from the law, which, contrary to what critics say, isn’t outdated.

Facebook’s approach to the TCPA “would read the statute into oblivion,” said Garner, an expert in legal interpretation who is editor of “Black’s Law Dictionary,” and who co-wrote “Reading Law” with the late Justice Antonin Scalia.

“I believe that TCPA is more important today than ever because of advances in technology. The social media companies know exactly where you are at all times. They know every mouse click that you’ve made for the last 20 years. And they can target in a very manipulative way. So … the basic technology of getting a message through to somebody who’s carrying a handheld device remains the same.”

Justice Clarence Thomas told Garner that technology evolves so quickly nowadays that the law can’t keep up with it.

“Most people would have no idea today” what a pager, a 1991 technology, was, Thomas said.

“Most people would not realize that caller IDs were cutting-edge and had to be purchased separately, that most people did not have cell phones. In fact, very few people did. And they were large. And car phones had to be installed,” he said.

“So technology has changed and moved along very rapidly. And don’t you think it’s rather odd that we are applying a statute that’s almost anachronistic, if not vestigial … to modern technology like Facebook and instant messaging, et cetera?”

“Don’t you think that at some point there’s … at least a sense of futility?”

Garner disagreed, saying “the average American is very well familiar with robocalls and … actually doesn’t care whether they were randomly generated or … sold because they gave their number to somebody and, in fact, would probably be more offended if they understood that somebody that they had dealt with and trusted had sold their numbers.”

“Counsel, if we rule your way, the logical consequence is that every cellphone owner would be subject to the harsh criminal and civil penalties of the [TCPA].”

Federal judges “know how to deal with those … frivolous claims. But Facebook’s scary argument that all cellphones might, with alterations, be made into automatic dialers really should be no more availing than the realization that all of us have hundreds of deadly weapons in our homes. Law-abiding Americans just don’t use rope and kitchen knives that way.”