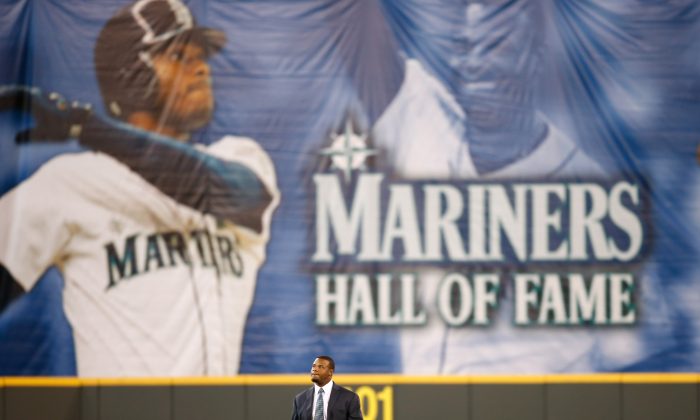 HOF Nominee Ken Griffey Jr.’s Career a Case of What Could Have Been

Barry Bonds, who retired after the 2007 season, is baseball’s all-time career leader in home runs with 762. Yet it was a contemporary of his, “Junior” Griffey, who most thought was the man to break Hank Aaron’s coveted record some 15 years ago.

Griffey, who is newly eligible for baseball’s Hall of Fame, was drafted first overall in 1987 by the Seattle Mariners and made the team just two years later at the ripe age of 19.

Playing half his games in the homer-friendly Kingdome, Griffey hit 16 home runs as a 19-year-old, 22 in each of the next two years, and soon he was leading the league in long balls. Four times he was the AL leader while playing in Seattle—including back-to-back seasons of 56 homers in 1997 and 1998—before wanting a trade to the Reds after the 1999 season.

By the end of the 2000 season—his first in Cincinnati—the 30-year-old, five-tool superstar had already amassed 438 home runs.

It seemed a cinch that the sweet-swinging Griffey would soon blow past Bonds—who had 494 at the same point—and eventually catch Aaron for the all-time lead—as long as he stayed healthy.

First it was a torn hamstring in 2001 that cost him some 50 games. The next year, he tore a knee tendon and had more hamstring problems and was limited to just 70 games. In 2003, the guy who was the youngest to reach the 350-home-run mark suffered a dislocated shoulder and a torn ankle tendon and played just 53 games—his lowest total ever. The next year, two hamstring tears limited him to just 83 games.

Suddenly four prime years had passed, and Griffey had just 63 home runs to show for them—a far cry from his Seattle pace.

For perspective, Bonds hit a major league record 73 home runs in 2001 (at age 37) and would eventually pass Aaron’s record mark of 755 while retiring with 762—although rumors of alleged performance-enhancing drugs use sprang up then and haven’t quieted down since.

Griffey, meanwhile, finally avoided major injury in 2005 and ended up being the NL’s Comeback Player of the Year when he hit 35 home runs with a .301 average in 128 games. It would be his last good season. When he finally hung it up during the 2010 campaign, he was fifth with 630 home runs.

Ironically, Griffey’s injuries seemed to be more proof that his achievements—which included 13 All-Star appearances, 10 Gold Gloves, 7 Silver Slugger awards, and the 1997 MVP—were done without a sniff of PED use, despite playing in what’s commonly referred to as the steroid era. He seems a lock for the Hall of Fame induction, which will be announced in the coming months.