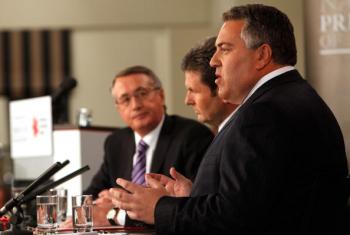 Sonya Bryskine
View profile
Follow
biggersmaller
Print
SYDNEY—The Coalition lashed out at the ruling Labor Government for unprecedented waste and driving the Australian economy into a $40 billion deficit during a live telecast debate on Monday, Aug 9.

Mr Hockey slammed the Labor Government for ongoing waste of taxpayers’ money on programs that they failed to deliver.

“You can make all the promises … but its how you deliver. Labor wasted money. Waste must stop,” said Mr Hockey.

He drew on the Home Insulation Program—a stimulus initiative that gave a rebate on roof insulation installation—which led to thousands of botched jobs, endangering the lives of many.

To date, there have been 370,000 installations costing more than $500 million, but how many of those were bad jobs remains unknown. The Home Insulation Safety Program (HISP) is in the process of rectification works, currently about 2,000 homes are being inspected under the HISP each week.

Mr Hockey also drew on the $16 billion school halls program, which the recent Orgill report indicated has led to millions of wasted dollars in inflated contractor prices and mismanagement.

While speaking at the debate, Mr Hockey made promises of helping the Australian economy return to the “road of stability.”

He urged the public to be vigilant of the current $40 billion national deficit—a sharp downturn from the $20 billion surplus that Labour inherited from the previous Liberal Howard Government.

“Record deficit, record debt, record incompetence … The Government’s second-term agenda is to fix the problems of its first term. That’s not good enough for the Australian people,” he said.