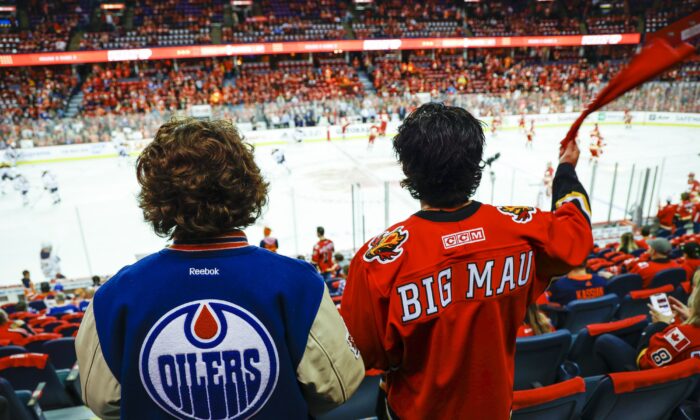 Edmonton Oilers and Calgary Flames fans watch the warm-up prior to NHL second-round playoff hockey action in Calgary on May 20, 2022. (The Canadian Press/Jeff McIntosh)
Canada

‘Hockey Is Back’: Flames vs Oilers Battle Fires Up Alberta Fans

After a long hibernation, the Battle of Alberta has returned to the NHL playoffs, prompting fond memories of the glory days of hockey, and a sign they might have returned.

The last time the Calgary Flames and Edmonton Oilers vied for the Stanley Cup was three decades ago.

Moshe Lander, an Edmonton resident and a senior lecturer in economics at Concordia University, remembers the old days well. He says the Battle of Alberta superseded all regional hockey rivalries because both teams were elite.

“This became the gold standard of battle. The equivalent, I guess, would have been seeing the Battle of Quebec with the Nordiques and the Canadiens, but it wasn’t a fair contest. The Nordiques were always the ugly stepsister to the Canadiens,” Lander said in an interview.

“This was the one kind of contest that seemed to take place almost every year and was a roughly even battle that had serious stakes.”

From 1983 to 1990, either the Flames or the Oilers reached the Stanley Cup final, often having to beat each other to get there, with the Oilers triumphing more often than the Flames. The only series win for Calgary came in 1986 due to the most memorable mistake in NHL history. Late in Game 7, an errant pass attempt by Oiler defenceman Steve Smith deflected off the back of goalie Grant Fuhr’s skate and into the net.

Those championship wins and clashes ended in 1991, remembered only by the imprints on the Stanley Cup and the memories of fans.

“Hockey is No. 1 by a mile in Alberta, and every single morning Albertans get up and think about their team—how did they do the night before—think about that night’s game. That’s all they think about, is hockey,” he told The Epoch Times.

“I love being immersed in that culture. But it’s split between a north and a south, Oilers fans and Flames fans, so to go against each other, it’s like a civil war.”

Flames coach Darryl Sutter, who grew up in Viking, Alberta, tried to downplay the division and up-play the unity just before the old rivalry resumed. After a slump in oil prices and the gloom of a pandemic, the province has found an exciting rivalry to bond over.

“What’s this doing in Alberta right now? It’s bringing people together. They might cheer for the Oilers, they may cheer for the Flames,” Sutter said at a press conference prior to Game 1.

Pederson saw Calgary’s first two home games in their prior series against Dallas. He says the Saddledome crowds are largely young, and a majority are watching the first playoff Battle of Alberta they can remember.

Lander believes “the enthusiasm is greater” for the Battle of Alberta than it was back then, and the hockey is better too. After decades of offence-killing hockey strategies and futility for the Flames and Oilers, both teams have returned to an elite status—but with a quality of hockey that is unrivalled.

“The talent in the NHL is infinitely better than it was back in the 1980s. If you go back and watch those games on YouTube, or if you catch them on TV when they have their classic matches and things like that, it’s almost unwatchable. Years ago, they weren’t nearly as talented, the hockey wasn’t as nearly as great,” he said.

“It’s a great product right now, so that makes it all the more enjoyable too.”

The only problem for Flames fans like Lander is that old familiar feeling that their Stanley Cup hopes could be dashed again by the team they want to beat the most, but usually haven’t.

“I’m imbued with a sense of doom and gloom. If Calgary is going to get knocked out of the playoffs, the thought that it could be at the hands of Edmonton [is] just like the ultimate gut punch. So I’m watching it like a horror film. That’s the way that I’m experiencing it now,” he said.

Pedersen says even NHL commissioner Gary Bettman knows that “hockey is back”—and both of them couldn’t be happier.

“Let’s hope for more hockey and hope that it’s a trend, not a fad, of the more goals and the full arenas and the intensity, and the fact that people get up in the morning and can’t stop thinking about that night’s game. That’s what we need. That’s what we have. Now, let’s keep it going.”