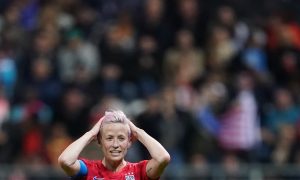 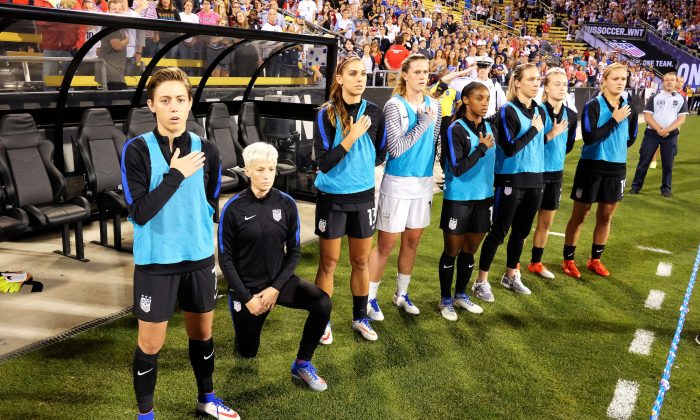 Megan Rapinoe #15 of the U.S. Women's National Team kneels during the playing of the U.S. National Anthem before a match against Thailand on September 15, 2016 at MAPFRE Stadium in Columbus, Ohio. (Jamie Sabau/Getty Images)
US News

A hockey coach who became a viral sensation online for telling his players to respect the national anthem or leave said he doesn’t think he was asking too much from his team when he made the speech.

John Krupinsky, who is an assistant coach for the Danbury Hat Tricks of the Federal Hockey League from Connecticut, garnered the attention of people online after a video of him giving a locker room speech to a number of players trying out for a pro hockey team was posted to Twitter on July 8. During his speech, he said he would not tolerate anyone disrespecting the national anthem.

“We’re not women’s soccer. We’re not the NFL. If there’s anybody here who is going to be disrespectful to either the American or the Canadian national anthem, grab your gear and get the [expletive] out now because you’ll never see the ice in this arena. We don’t have that problem in hockey, we’re better than that but there was no sense in wasting anybody’s time if that [expletive] was going to happen,” Krupinsky said in the video.

Coach tells players if you’re going to disrespect the national anthem, get the f*ck out pic.twitter.com/YT7IXa7yVO

During a recent appearance on Fox & Friends, Krupinsky said he made the speech to warm up the players and show them who’s boss.

“As the assistant coach, it was my job to get up there to get them prepared. It was the first day of camp. … You know you want to warm them up. You want to wake them up,” Krupinsky said during the interview. “They’re in there getting dressed, you know, these are younger kids trying out for a team, 20 or 25, this may be there first shot at pro-hockey. So when you get out there, you’ve got to warm them up, you’ve got to let them know who’s boss. There was no sense in us wasting anybody’s time with somebody if they’re never going to step on our ice and play,”

Krupinsky, who is also a police sergeant with the Danbury Police Department, said the national anthem is important to him.

“I take pride in my country,” he said. “I’ve unfortunately seen it cover too many coffins. I think we can take a timeout to give two minutes’ worth of respect to our soldiers, to our firemen, to your policemen.”

“I don’t think that’s asking too much. I’m not going to apologize for asking players to show a little bit of respect when it’s either the American or Canadian national anthem,” he added.

The coach said that he would not stop his team members from protesting during their own time but he would not tolerate it when the national anthem is playing before a game.

“Some people said, ‘oh you wouldn’t let your players protest.’ I wanna be clear: My players would be free to protest on their day off,” he told the program. “If they had something they wanted to do. My owners are awesome–they would give them the team bus to go.

“But when they’re playing the national anthem, I don’t think it’s too much to ask your employees to show some respect for the flag and for the country,” he added.

At one point in the interview, a Fox & Friend host told the coach, “It sounds like what has happened in some other sports really gotten under your skin.”

Krupinsky replied, “Well I wouldn’t say it wasn’t a catalyst for some things.”

The women’s soccer team has recently been garnering extensive attention for overtly displaying their political preferences. The team’s co-captain Megan Rapinoe has received backlash for refusing to sing the “The Star-Spangled Banner” before the team’s first World Cup match against Thailand on June 11.

She was also the first white athlete to kneel during the anthem in 2016, in support of NFL quarterback Colin Kaepernick, who started kneeling during the anthem to protest against perceived racism and inequality by law enforcement toward African Americans.

Rapinoe was also involved in a public feud with President Donald Trump after she said she would not visit the White House if her team wins the World Cup. She doubled down on her comments a several press conferences during the World Cup period.

Her comments sparked backlash and even criticism from Trump, who admonished her for conduct that he believes disrespect the White House, the flag, and the country.

….invited Megan or the team, but I am now inviting the TEAM, win or lose. Megan should never disrespect our Country, the White House, or our Flag, especially since so much has been done for her & the team. Be proud of the Flag that you wear. The USA is doing GREAT!

“Megan should never disrespect our Country, the White House, or our Flag, especially since so much has been done for her & the team. Be proud of the Flag that you wear. The USA is doing GREAT!” Trump said.