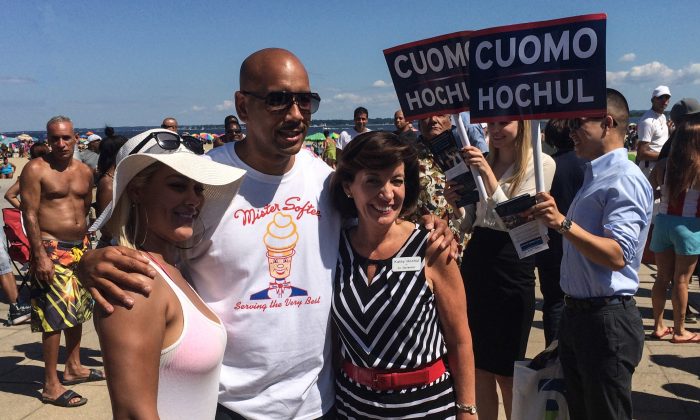 NEW YORK—Kathy Hochul will make her voice heard, at least behind closed doors.

Cuomo’s running mate in the Democratic primary said that she would be an independent lieutenant governor, and make sure Cuomo knows where she stands.

“You can look at the editorials of the Buffalo, the Rochester papers, areas that I represented in Congress, and they’ll always point out that I’m fiercely independent on behalf of my constituents,” she said while campaigning in the Bronx on Sunday.

She added the caveat that her disagreements with the governor would be private, in contrast with her opponent Tim Wu, who has promised to use the office to vocally criticize the governor if need be.

“Just as you don’t see vice president Biden publicly challenging the president, but gives him his opinion behind closed doors, I’ll perform that role as well, because the last thing we need in government is more divisiveness,” Hochul said.

Hochul has been dogged on the campaign trail by her record of opposition to driver’s licenses for illegal immigrants and gun control, which she has tried to defuse in the past by playing down the importance of her office.

“People have to understand the role of lieutenant governor. I would not be making policy now, I am there to support the administration,” Hochul told Errol Louis in a TV interview on NY1 on July 18th.

“I don’t cast a vote, I would not have a say in something like this, unless, as you said, it comes to a tie in the senate,” Hochul added, and expressed no opinion on municipal IDs in New York City for illegal immigrants, saying she’d “defer to the expertise of the people who know their locale best.”

Hochul represented a Republican district in upstate New York for 19 months, and accordingly has a voting record easy for her opponents to take shots at.

“I ask Tim Wu to walk a mile in my shoes—to have a 100 percent pro-choice record in the most Republican district in the state of New York takes a little more than sending out tweets,” she said at a press conference promoting the Women’s Equality Party, according to the Observer.

Hochul was responding to a Teachout-Wu campaign email that criticized Hochul’s vote to cut funding for cervical cancer screening.

Still, as Cuomo’s representative on the campaign trail, Hochul’s transition as a state-wide Democrat has been eased by those looking to keep ties with the incumbent governor, who maintains a wide lead in the polls over his challengers.

On Sunday, Bronx borough president Ruben Diaz Jr. campaigned with her in Orchard Beach, where the Bronx Salsa Festival was taking place, handing out Cuomo-Hochul flyers, posing with beach-goers for photos, and telling them to vote for Hochul.

“I want to thank the Bronx Tourism Council for making sure we showcase this fantastic culture we all embrace, which makes America so wonderful, and salsa is an important part of that heritage,” she said.

Across the beach and boardwalk, Hochul was warmly greeted by the largely Hispanic and Spanish-speaking crowd, and few passed up the chance to take a selfie with her and Mr. Diaz.