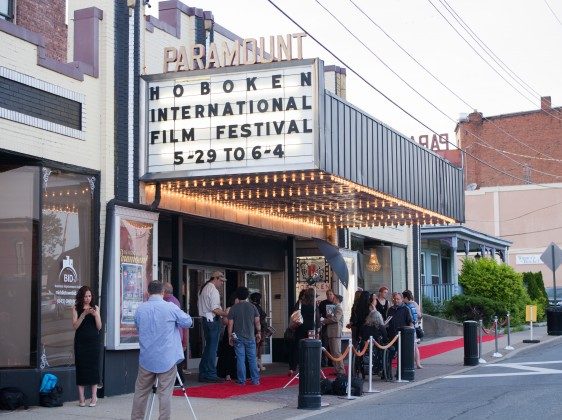 The entrance of the Paramount Theatre in Middletown on May 29, 2015, which held the week-long Hoboken International Film Festival. (James Smith/Epoch Times)
New York

The door is not closed, but time is getting tight
By Holly Kellum

MIDDLETOWN—Middletown’s contract with the Hoboken International Film Festival (HIFF) is up, and unless the city and the festival chairman can find some common ground, the two may be parting ways.

Middletown Mayor Joseph DeStefano said July 6 he was waiting on Del Vecchio to present a better contract, saying he made an offer that was “not acceptable.”

This was news to Del Vecchio, who called the price “incredibly reasonable” and said he changed it from his original price of $35,000 starting in 2017 and increasing by $5,000 a year over the 3-year contract.

“I think that this is a shame,” Del Vecchio said. “They did contact me right after the festival was over and said ‘Lets start talking,’ and I started talking and have heard nothing since.”

He wants the festival, which relocated to Middletown’s Paramount Theatre in 2013, to remain in Middletown, he says but if the contract is not signed by the end of the month, he said he is going to “seriously start assessing other options.”

“My patience in negotiating this is extremely thin at this point,” he said, “If July 31 comes and goes, there’s a 99 percent chance it’s not coming back to Middletown.”

Without giving specifics, the Warwick resident said he would like to take it to another Orange County municipality, but would also be looking outside the county and the state for new locations. Other municipalities have given him more lucrative offers, he said, but he has said repeatedly he would take a lower sponsorship if it can remain in Middletown.

“I have been saying this well over a year, I want to stay in Middletown,” he said.