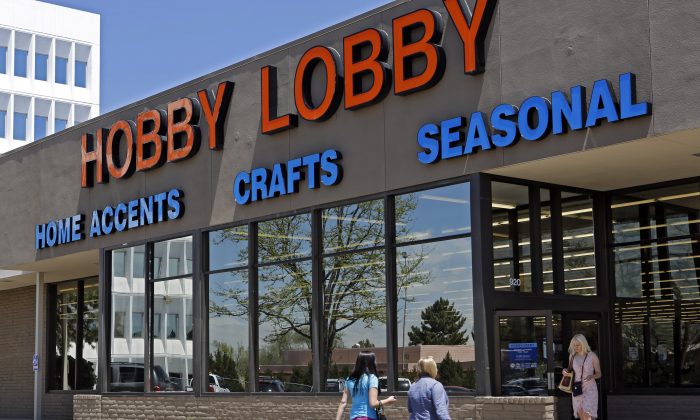 In this May 22, 2013, customers enter and exit a Hobby Lobby store in Denver. The Supreme Court is poised to deliver its verdict in a case that weighs the religious rights of employers and the right of women to the birth control of their choice. Employers must cover contraception for women at no extra charge among a range of preventive benefits in employee health plans. Dozens of companies, including the arts and crafts chain Hobby Lobby, claim religious objections to covering some or all contraceptives. (AP Photo/Ed Andrieski, File)
Social Media

An article saying Hobby Lobby stoned an employee to death is fake.

The fake report was posted to The Daily Currant, a satire news website.

“According to a report in the Ozark Post-Gazette, the store’s management decided to execute Jeremy Gleason, 43, in an alley behind the store in accordance with the Biblical verse Leviticus 20:13,” the article says. It adds: “The assailants reportedly tied Gleason to a pole and threw large chunks of granite and whole bricks at his body. An autopsy later revealed the adoptive father of 2 young children died of blunt force trauma to the head.”

According to the Daily Currant’s disclaimer, it doesn’t publish real news stories but mainly focuses on political satire.

“The Daily Currant is an English language online satirical newspaper that covers global politics, business, technology, entertainment, science, health and media. It is accessible from over 190 countries worldwide – now including South Sudan,” the disclaimer reads. “Our mission is to ridicule the timid ignorance which obstructs our progress, and promote intelligence – which presses forward.”

The publication stresses it’s not real in the least.

“Our stories are purely fictional. However they are meant to address real-world issues through satire and often refer and link to real events happening in the world,” it says.

However, a number of people thought it was real.

“I think the big question here is… Who gave them the right to judge anyone that is only god’s right people!!!” one person said.

Added another: “That is still murder i dont care what your reglion is so people can kill other people and just says my reglion told me to do it.”