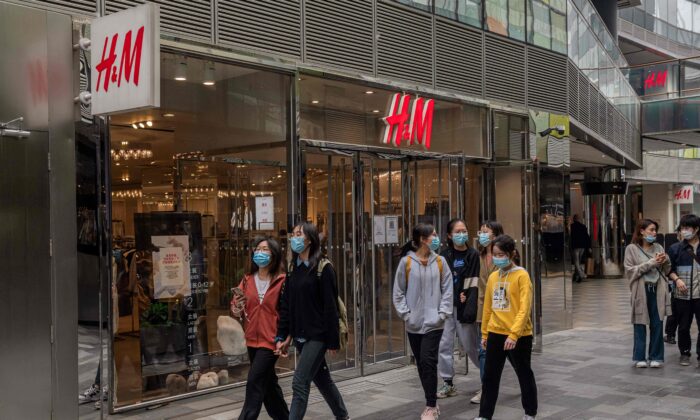 H&M shut down its flagship store in Shanghai, the latest sign of the impact of Beijing’s strict zero-COVID policy on the business of international fast-fashion retailers.

After two months of lockdown, the epicenter of Shanghai finally reopened; however, traffic in the city’s shopping centers remained low.

The store was opened earlier this month, but now, this three-story store in downtown Shanghai is boarded up, and its H&M sign is gone, according to Reuters on June 24.

Business Slump in China Before COVID-19

The Shanghai flagship store was H&M’s first and largest store in the Chinese market since it opened 15 years ago.

After announcing its commitment to responsible business conduct by refusing to use Xinjiang cotton, and saying that the move had nothing to do with politics on its official Weibo account on March 24, 2021, the company started to see its sales going downhill.

In an undated statement, H&M expressed its deep concern over the use of forced labor in Xinjiang in the supply chain.

In fact, H&M sales started to slump at the end of 2019, but insiders believe it was due to the lack of connection to the local authorities and sponsoring local events, a typical consequence of doing business in the Communist regime, as indicated in a Bloomberg article .

The lockdown measures in Shanghai hit the retailers hard. Fashion retailers were stuck with piles of unsold stock as cautious consumers stayed away from the commercial hub’s glitzy shopping districts, Reuters reported.

The closing of the H&M Shanghai flagship is the latest departure of global chains from the restrictive Chinese market.

Earlier, other international chains reacted to the reduced Chinese market by limiting services.

Amazon stopped supplying retailers in China with Kindle e-readers on June 2, and will shut its Kindle e-bookstore in China next year.

Nike reportedly announced to its customers in China via a notice in its Nike Run Club app that the company will “cease service and operation” in the region starting July 8.

Airbnb announced on May 24 that the company will be removing all 150,000 of its listings in China starting on July 30. According to the Airbnb 2020 Securities and Exchange Commission report, Airbnb has been facing increased difficulty in complying with requests or other requirements as interpreted by the regime’s agencies.

Xia Yu contributed to this report.