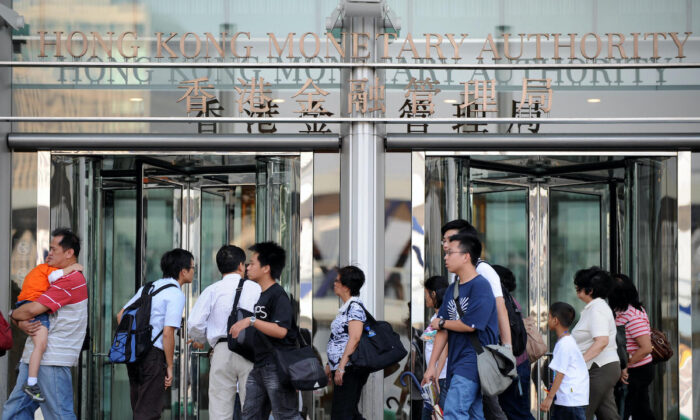 The Hong Kong Monetary Authority (HKMA) recently admitted that it’s been collaborating with China’s Central Bank on countermeasures for potential U.S. sanctions, a mutual geopolitical risk for both Hong Kong and mainland China.

At a May 3 meeting in the Hong Kong Legislative Council, questions were raised about the geopolitical risks and the overall financial risks that Hong Kong may encounter, including the consequences of being sanctioned by the United States, such as having overseas assets frozen or being kicked out of the SWIFT (Society for Worldwide Interbank Financial Telecommunication) system.

Eddie Yue, president of the HKMA, dodged questions about how many overseas assets Hong Kong actually owns. However, when it comes to whether or not they will plan for possible sanctions, he he said, “the geopolitics we are facing is very complicated,” and acknowledged looking at ways to deal with different U.S. sanctions, “this we have been doing.”

Given the common geopolitical risks at stake, there has been close communication between the Beijing-based Central bank and HKMA on market development and RMB business, as well as financial security, according to Yue.

Therefore, HKMA has made backup plans for different scenarios, including the freezing of assets or the removal of Hong Kong from SWIFT, said Yue.

The lawmakers also expressed concerns about the impact of the U.S. interest rate hike.

The U.S. Federal Reserve on May 4 initiated a cycle of interest rate hikes, that, combined with a sluggish stock market, devalued Hong Kong’s currency. On May 10, HKMA, the de facto central bank in Hong Kong, used its foreign exchange reserves to buy HK$1.586 billion (about $202 million) from the market in a bid to support a tight band of HK$7.85 to US$1 based on the Linked Exchange Rate System (LERS.)

However, if the United States continues to raise interest rates, Hong Kong’s foreign exchange reserves may undergo greater pressure, which could spill over into the local economy.

At the same time, mass outflows of capital from Hong Kong are occurring. Daiwa Capital Markets estimated in February that Hong Kong would have at least another $100 billion (about HK$780 billion) of net outflow by the end of 2023, said Lai Chi-man, chief economist of the financial research company.

In his opinion, the reaction of the HKMA, which has always been prudent to the public, has alarmed financial institutions, investors, and citizens that began to fear that if Hong Kong’s assets are frozen or Hong Kong is removed from SWIFT, assets will depreciate significantly or even “dwindle to nothing,” and Hong Kong’s status as an international financial center will “collapse overnight.”

The United States sanctioned a number of Hong Kong and Chinese officials after the Hong Kong National Security Law was implemented in 2020. Beijing retaliated with an anti-foreign sanctions act.

During the 2019 Hong Kong protests, which put a spotlight on the deteriorating political environment in Hong Kong, the authorities began to recognize a prepared solution was needed to tackle the event of being delisted from SWIFT. Now, it is time to again debate the possibility of unpegging the Hong Kong dollar from the U.S. dollar, or Hong Kong being rejected from SWIFT, Ngan said.

The current USD-pegged LERS is no longer feasible for Hong Kong as the region’s economy goes nearer and nearer to mainland China, said Francis Lui, former head of the Department of Economics of the Hong Kong University of Science and Technology, in a Hong Kong Commercial Radio program on May 8.

Comments like Lui’s—who has a very good relationship with Yi Gang, the governor of the Central Bank—are likely a piece of internal information leaked out as a bellwether, Joseph Lian, renowned scholar and senior current affairs commentator, told The Epoch Times on May 12.

Earlier, on April 16, former governor of the Central Bank, governor Zhou Xiaochuan, said in a speech at the 2022 Tsinghua Wudaokou Global Finance Forum that SWIFT is not irreplaceable, but that replacing SWIFT requires many things to be resolved and may affect trade before and during the transition period.

Beijing ordered government agencies to conduct stress tests to study the impact on China’s economy in the event of  sanctions, similar to those imposed on Russia, said the Guardian on May 4.

Victor Ng, a Hong Kong-based senior banker and current affairs commentator, pointed out in an interview with The Epoch Times on May 11 that if China and Hong Kong are removed from SWIFT as a result of being sanctioned like Russia, Hong Kong will be in a miserable situation. “For example, if calculated using the price of a product, a $100 item in Hong Kong could be worth $10 overnight,

“And the Chinese Communist Party and all four of the largest state-owned Chinese banks would have no way to do foreign trade,” said Ng.

According to Ng, Hong Kong is to use the U.S. dollar settlement. So if the SWIFT system is shut down, Hong Kong has no place to use the money, and the bills will become wastepaper. Likewise, the money overseas, which has been remitted, will not be allowed to be sent back to Hong Kong.

“In other words, if [assets] were frozen outside, China and Hong Kong will change into a ruin overnight.”

Albert Song, a political and economic researcher, shared similar views, adding, that many of Hong Kong’s foreign exchange reserves in Europe and the United States could be the first to be sanctioned once a conflict [China military attack on Taiwan] occurs.”

Whether Hong Kong can bypass SWIFT depends on the measures and scope of sanctions. Theoretically it may be bypassed, but should that occur, Hong Kong’s regular financial transactions would be badly affected, and its status as an international financial center doomed to be lost,Song told The Epoch Times.