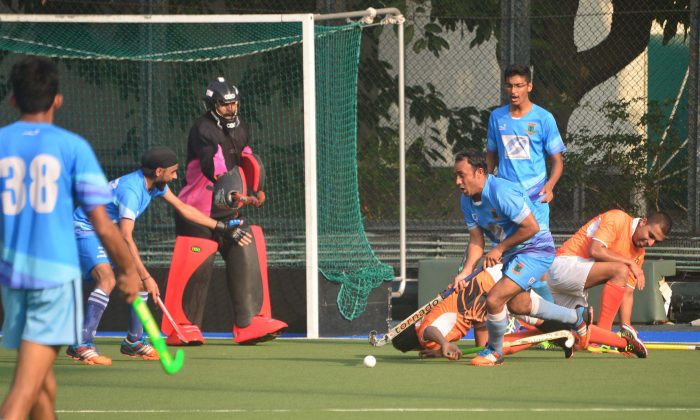 NBC Goalkeeper, Singh Dilyadav and Farooz Khan, player/coach clears what should have been another danger on the NBC-A goal. (Eddie So)
HK Hockey

Field Hockey—HKHA Cup
By Eddie So

NBC-A coach Farouk Khan was not perturbed and visually proud of his young charges display against SSS-B side who also beat them for promotion to the Premier League to leave NBC in second place.

Khan, who claimed he was the oldest in the side and in his 40’s said the display by his team ensured there was more to go for his players, whose average ages are between 20-22 years.

“This is a relatively young side and what they showed today was a fighting spirit that we need to bring this team forward,” said Khan, who was on the victorious side last season.

“All we lacked was the finishing touches today, as we were able to take the ball right up to their ‘D’ but were unable to kill it,” he said.

With NBC’s demise, it opens the door for SSSC-B whose senior club is looking for a win in the Holland Cup with their A-team,. The B team is hoping for success in the second-tier HKHA Cup.

NBC-A had to call up their B-team goal keeper Singh Dilyadav as their regular keeper was out with a fever.

“There was no doubt today we were the more experienced side but it’s good to see youngsters coming up through the ranks,” Singh said, who once played for Hong Kong as well as for a number of local clubs.

His side took their chances as they knew what to expect against a side they have met previously during the league and other tournaments this season.

“NBC have some good young players and if given the right chances and training, I can see many of them representing Hong Kong in the future,” said Singh.

With the victory, SSS-B will face Hong Kong Football Club-C in the final after they tore apart SSSC-C 7-1.

In other semi-finals played, it was the HKHA Bowl to take center stage with Antlers-B outpacing Scorpions 3-0 while in the other semi-final Marcellin-A lost to Recreio-D 0-3.

In other related news, Dutch-A earned Premiership promotion after they edged out Rhino-A by a 2-1 score in the Division 1 playoff.

Khalsa U16 youth hockey team were crowned HKHA youth cup champions by beating Antlers 3–0 in the final at King’s Park.