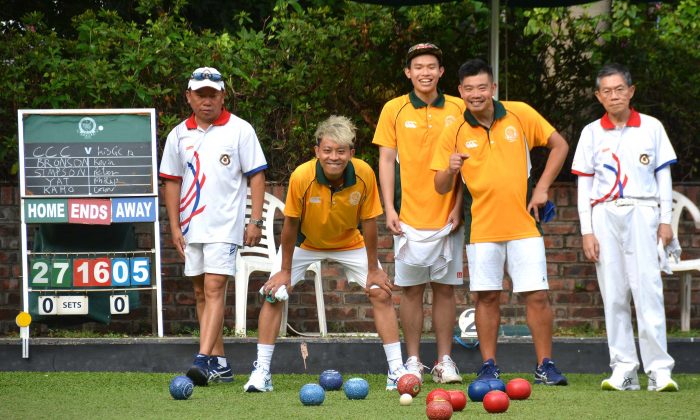 A happy Craigengower Cricket Club team (yellow shirts) skipped by Lee Ka Ho (not in photo) were on their way to defeating Kowloon Bowling Green Club in their league meeting last Saturday, June 10. However, the game eventually finished 4-4 as the other two rinks lost to their opponents. (Stephane Worth)
HK Lawn Bowls

KCC, who led the table by a point before last week’s fixture, faced second-placed HKFC on the tricky indoor green at Sports Road. Their only victory was from the rink skipped by the reigning Bowler of the Year Chadwick Chen, who defeated Johnny Tsang 12-26.

The 6-2 victory allowed HKFC-A to leapfrog KCC and head the table by three points.  HKFC have also played two games less than the rest of the teams so their edge should further expand once these outstanding matches are played.

In the match between third and fourth placed teams, defending champions Craigengower Cricket Club (CCC) could only draw 4-4 at home against Kowloon Bowling Green Club (KBGC-A). The result keeps KBGC in third place, trailing the leaders by six points. CCC dropped to fifth as HKFC-B moved above them after an 8-0 victory against the Youth team.

At the bottom, newly promoted Club de Recreio registered their first win of the season with a hard-fought 6-2 victory at home against the Police team. With just nine points, the team remains bottom and has nine points less than third-from-bottom KBGC-B, who also has a game in hand.

In the women’s section, Island Lawn Bowls Club (ILBC) opened up a lead of 12 points after winning all games this season. Their latest victory was against the defending champion Shatin Sports Association (STSA) at home. STSA remain second after this defeat. HKFC-B move into third place with their 8-0 win against United Service Recreation Club.

CdeR ladies move out of the bottom for the first time this season after defeating second-from-bottom City Lawn Bowls Club at home.

This week in Lawn Bowls.

The Premier league continues this Saturday June 17 starting at 2:30pm. On Sunday June 18, the fourth round of the National Triples is scheduled, starting at 10am for men and 3:30pm for women at all greens in Hong Kong.