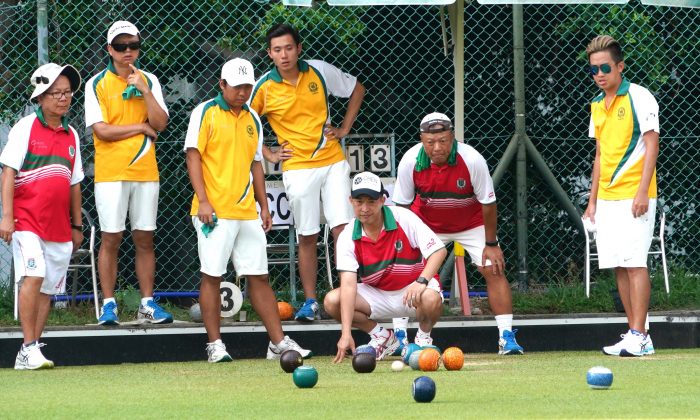 HONG KONG—Hong Kong Football Club (HKFC) continue to display their dominance in the women section at the local lawn bowls arena by clinching the National Pairs and Fours at the first Finals Day of year on July 1.  Their team also won the Mixed Pairs.

2017 Bowler of the Year Vivian Yip partnered with 2016 Bowler of the Year Dorothy Yu to win their first National Pairs title, defeating Erica Leung, Joanne Leung from Filipino Club 15:12 in a tight and low scoring final.  The match was tied at 12:12 after the 15th end but the HKFC duo scored one apiece in the following three ends to win the title.

This was the first success for the Yip and Yu combination at the Pairs, despite Yip being runner-up for two consecutive years in 2014 and 2015.

In the women’s National Fours, the HKFC team of Josephine Lam, Connie Chung, Rita Shek and Wanis Sze faced a young team from Craigengower Cricket Club (CCC) which consisted of Andrea Chan, Angel So, Olivia Yu and veteran Helen Cheung.  They were trailing their opponents for most of the game and needed to take four shots in the last two ends to win the match 14:12.

In the men’s Pairs, experienced bowler Oscar Adem missed the chance to complete his grand slam collection when his combination with Stanley Lai lost convincingly to a young team of Jerry Ng and Arthur Lam from KCC 23:10.

Adem won his first National Singles in 1968, and National Triples and Fours in 1965 but the National Pairs has eluded him since then.  This was their fourth runners-up finish in the Pairs.

For the men’s National Fours, CCC’s  Imen Tang, Martin Shum, Liu Chin Hong and Jordi Lo successfully defend their title after blasting away a strong Kowloon Cricket Club team which was skipped by Ken Chan.  This was Lo’s fourth Fours title and ironically his first title was won together with Chan back in 2008.

The CCC team are the first to defend the Fours title since 1997 when a HKFC team skipped by Bill McMahon completed their mission.

Results Roundup for the Finals Day on July 1, 2018

The Premier league continues this coming Saturday July 7, with matches for Divisions 7, 8 and 9 starting at 2:30pm.   These will be the last games before the summer break.