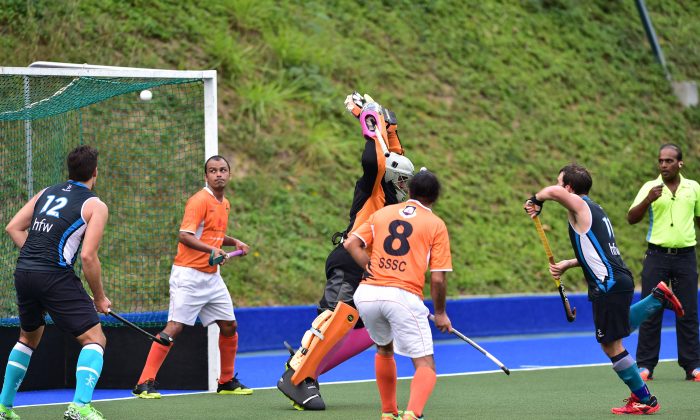 HKFC Move into Second Place with Win Over SSSC

HONG KONG—With top of the table Khalsa sitting on the sidelines last weekend, the important match in the HKHA Premier Division was for second place between HKFC and SSSC.

Playing at King’s Park one would expect Singh Sabha in second place in the standings and 1 point ahead of Club, to have the advantage on their own turf. But missing their Pakistan captain, although the side played well, they struggled to convert important chances. But it was not only Singh Sabha that stuttered, both teams did not make the most of penalty corners with many going astray.

The game was fast moving with good skills and entertaining to watch. SSC seemed to have the edge when it came to gaining possession from their opponents and they were certainly quick in attack but is was Club with a more measured approach that broke the deadlock with a goal on 15 minutes. The match was still very even and SSSC equalized after 30 minutes from a penalty corner score, leaving the game all square at 1-1 at half time.

HKFC (Club) added a second goal from a penetrating move into the SSSC circle and Yan Adams finished it off with a well-directed rising shot. SSSC had their chances with two penalty corners awarded within 2 minutes midway through the second half but both went begging. These penalty corners were interspersed by a good counter attack by Club. But as the game progressed SSSC pushed forward with more determination but just towards the end of the game Club had two break-a-way goals to finish with a slightly flattering score of 4-1. The win put Club into second place in the standings leapfrogging SSSC by 2 points but still 6 points behind Khalsa who are on 42 points with a game in hand.

In the earlier match also at King’s Park an understrength KNS played a well-organized and determined Hong Kong Cricket Club side that has progressed well after rising to the premier division two years ago. HKCC were two goals up after 2 minutes of play. The attackers were very sharp in the goal area converting goals with fine deflections from hard hit shots at goal. HKCCs 3rd goal was even better; the ball was hit up to the right hand post and directed into the goal with a fine touch. HKCCs 4th goal came on 20 minutes from a penalty corner, the first attempt was pushed outside the circle but was returned and again deflected to score. KNS hit back from a penalty corner just 3 minutes later from a short corner which required several attempts within the circle (4-1).

HKCC’s 5th goal was from another hard hit shot into the scoring area, it was pushed sideways, found Patrick Burn unmarked who slotted it passed the keeper making the score 5-1 at half time.

HKCC made no more scores in the second half but Nadeem Mohammad scored two superb individual goals for KNS gathering the ball near the half way line and running into the goal area to score.

Next Fixtures
There will be a top of the table meeting between Khalsa and HKFC on Sunday (Feb 21) at Kings Park. For Club, this is like “going into the lion’s den” and bound to bring out many Khalsa fans to watch the display. Also next week at King’s Park, Pak-A play KNS and HKCC play SSSC. This will be an opportunity for HKCC to make further progress as they are now in 4th place but still 7 points behind SSSC.