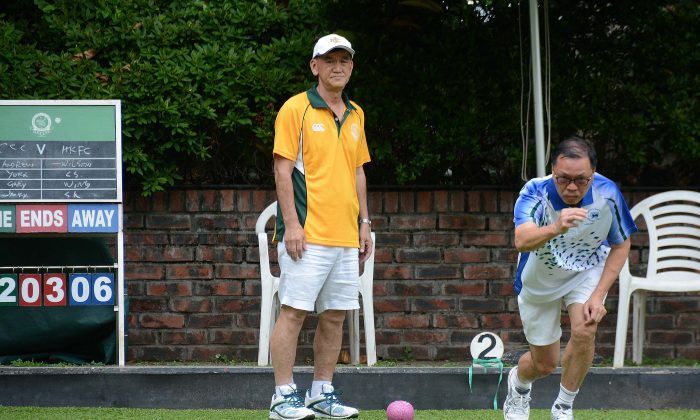 SK Ng (delivering) from Hong Kong Football Club on his way to defeating Jacky Wong of Craigengower Cricket Club in their league meeting last Saturday, May 13, 2017. CCC won the game 6:2 to maintain second place on the table. (Stephanie Worth)
HK Lawn Bowls

HKFC-A, who need to play all their first half matches at home due to a planned renovation of its indoor green starting from July, started well in the new season. After dropping two points at the hands of the their clubmates on the opening day, the team went on to defeat Kowloon Bowling Green Club and Tuen Mun Sports Association 8-0 and amassed a total of 165 shots in these two games.

CCC began the campaign with an 8-0 home win against newly promoted Club de Recreio (CdeR). They then played a tough away game against the Police but still prevailed with a 2:6 victory.

In the third game last weekend, May 13 when CCC played another promoted team HKFC-B at home. The CCC team made a significant change to the line-up with seven regulars in the first two games not on the list. The game finished 6-2 to CCC with victories from Stanley Lai and Simpson Cheung. The two points dropped were from the rink skipped by Jacky Wong, who lost by one shot to SK Ng.

As some of the matches did not finish due to the heavy rain in the afternoon, the table is now topped by HKFC-A, who have 22 points, followed by CCC’s 20 points.  Kowloon Cricket Club are .ion third place with 13 points. At the bottom, CdeR have just 1 point so far but they have only played two games.

In the women section the competition is tense with four points separating the top four teams.

Boosted by the inclusion of Chinese international Yu Xiao Yan, Indian Recreation Club have won all three games to stay at the top. Their latest achievement was against the defending champions Shatin Sports Association last weekend and they still managed a 6-2 victory.

Two points behind in second place are Island Lawn Bowls Club who won the Triples League earlier this year.

In third place are HKFC who have won nine consecutive titles before last season. They are level on points with last year’s runners-up Kowloon Cricket Club.

The newly promoted CCC are at the bottom with four points only.

The Premier League continues this Saturday (May 20) starting at 2:30pm at all greens in Hong Kong.