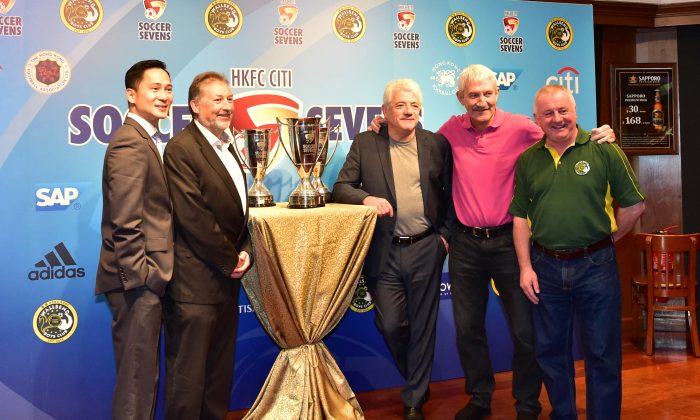 HONG KONG—Tuesday (Feb 7) saw the announcement of this year’s annual HKFC Citi Soccer 7’s to be held at Hong Kong Football Club on 26-28 May 2017. The announcement included the participation of ex Liverpool FC stars Kevin Keegan and Terry Mcdermott, who were respectively also manager and player for Newcastle United FC, currently in Hong Kong to promote the Hong Kong branch of the Wallsend Boys Club.

It was announced that this year’s main 7’s competition would be the most diverse since its inception, and include teams from France’s Ligue 1, Germany’s Bundesliga, and Italy’s Serie, to complement the tournament’s usual quotient of English and Scottish Premier League talent, as well as participants from Japan’s J-League, Korea’s K-League, and Australia’s A-League.

It is hoped that some of the new participants can have a similar impact on the tournament as their predecessors have in prior years such as when Spanish giants Atletico Madrid emerged as victors in their only year of participation (2015), and when the J-League’s Urawa Red Diamonds were tournament winner in consecutive years in an earlier era. Details of the exact teams and prospective future stars on show will be released at a later date.

Winners of the main tournament in recent years have mainly been teams entered by English Premier League Clubs: Newcastle United, Leicester City, Manchester City and last year it was Aston Villa. Atletico Madrid punctuated this run by English clubs by winning in 2015.

Wallsend Boys Club, have been participants in the Masters Competition for several years, will be looking to claim their first victory in the event, beating the likes of current holders Citi All Stars, and previous champions USRC.

Wallsend Boys Club was started in 1904 outside Newcastle upon Tyne to help better the lives of the sons of shipyard workers on Tyneside. It is well known in the UK for developing talented youngsters, many of whom have played at the top level in England and Europe.

The local branch of the club will try to identify potential players from underprivileged communities in Hong Kong and give them support to develop.

“We are looking to establish exactly what we have on Tyneside in Hong Kong and give underprivileged children the chance to play football and get them into leagues. We will supply strips from the UK and give them all the backing that we can” said Wallsend Boys Club chairman Steve Dale.