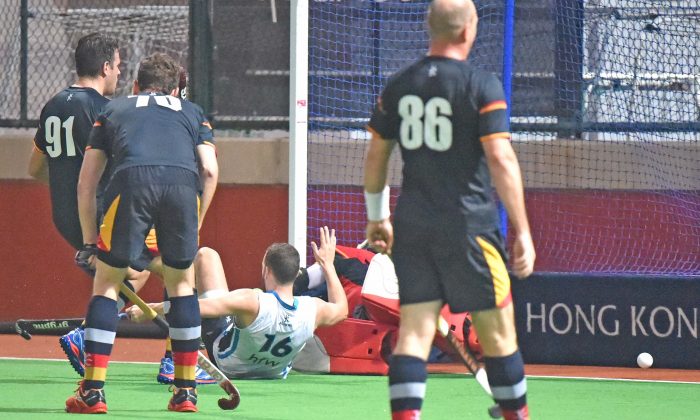 Thomas Moore deflects a ball from Ishtiaq Ahmed past the HKCC-A keeper to make the score 3-0 in their HKHA Premier Division Match at HKFC on Sunday Jan 8. The final result was 4-0 to HKFC. (Bill Cox/Epoch Times)
HK Hockey

HKFC Battle to Win Against Cricketers, in Hong Kong Hockey

HONG KONG—For the second half of the season, the HKHA Premier league has been split into two sub division A and B, with the top 5 teams at the half way stage in the A group and the remaining 5 teams in the B group. Home and away matches will be played between all teams making 10 rounds in total.

A group comprises the A teams of SSSC, Khalsa, HKFC, KNS and HKCC. With 5 teams in each division 1 team takes a bye at each match day.

On Sunday Jan 7 HKFC played HKCC at HKFC and SSSC played KNS at King’s Park. Khalsa had bye in this first round. In Group B, HKFC-B entertained KCC-A and Pak-A met with Shaheen-A. Valley-A did not have a match this week.

At King’s Park, SSSC-A confirmed their top position in the table with a fine 8-2 win over KNS-A, to move up to 28 points.

The Group A match between HKFC-A and HKCC-A produced a “Battle Royal”. Although HKCC finished the 1st half of the season mid-table and some way down on points they have strengthened their squad with a new recruit from Australia and have brought in Ken Asaku, an ex-Japan International as sweeper. HKCC are a hard team to beat, they have a good goalie, are tough in defence with good ball distribution skills and have a number of skillful attackers. They really are bordering on the top level.

HKFC moved ahead after 17 minutes of play slotting home after the initial shot from a penalty corner had been blocked by the keeper. But HKFC were hard pressed to convert a second goal.

It was not until 13 minutes into the second half that HKFC were awarded 2 penalty corners in a row and scored their 2nd with a shot from the left of the shooting area passing the goalie at head height. Their 3rd goal came from a strike from the edge of the circle towards the left hand post which was converted by Thomas Moore with 13 minutes left on the clock. They added a 4th goal as the match was coming to a close for a 4-0 win.