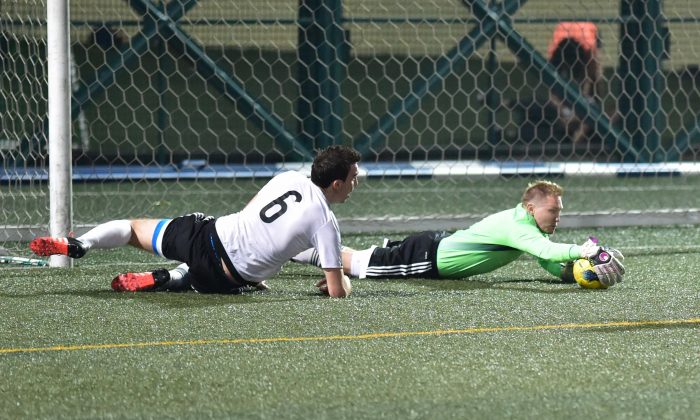 GAS Goalie, Adam Bilbey, makes one of his important interceptions of the season in the match against Club Colts on April 3 helping his team to another important win in their journey to the 2015-16 league title. (Bill Cox/Epoch Times)
HK Football

In Saturday’s (Apr 16) first game, Yuen Long surprised Eastern with a 1-nil victory courtesy of a strike from Luciano Da Silva in the 19th minute after Eastern goalkeeper Yapp Hung-fai had saved Aleksander Randelovic’s shot from Ip Chung-Long’s free kick. Despite the time remaining Eastern could find no way back.

In the day’s later game BC Rangers prevailed 5-2 against Dreams Metro Gallery despite conceding an early 22nd minute strike from Kenji Fukuda. BC Rangers equalised in the 44th minute when Tommy Chuk scored from the penalty spot after he was brought down. BC Rangers took the lead in the 50th minute through a Diego Folgar strike, whilst Tommy Chuk increased the lead to 3-1 in the 71st minute with his second. Quentin Lendresse increased the lead to 4-1 in the 87th minute, and goals from Hui Ka-lok for BC Rangers and Leonidas Soares for Dreams Metro Gallery in the final minutes resulted in the 5-2 BC Rangers victory.

Tai Po lead the table with 56 points from 23 matches, with HKFC second with 50 points from the same games, and Sun Hei third with 46 points from 22 games. With 3 or 4 matches remaining, Tai  Po look to be likely champions, with second place a fight between HKFC and Sun Hei.

Central & Western lead the table with 71 points from 26 matches, with Hoi King second with 66 points from 25 games, and claim the promotion places at season’s end.

In the first division GAS won the top of the table clash with Albion 2-1 to claim the Yau Yee League Championship, Wanderers prevailed 2-1 in the Sports Road derby against Colts, USRC were  4-nil winners against Baker Tilly Spartans, KCC Dragons drew 2-all with HKDC Mobsters, and Swiss XI were 6-nil victors over HKU70’s.

ANP lead the division with 51 points from 21 games to clinch the championship with one game remaining, with Dynamo second with 46 points from the same games.

Maccabi HK lead the division with 58 points from 21 matches to win the championship, with Friends of Barclays second with 49 points from the same matches.