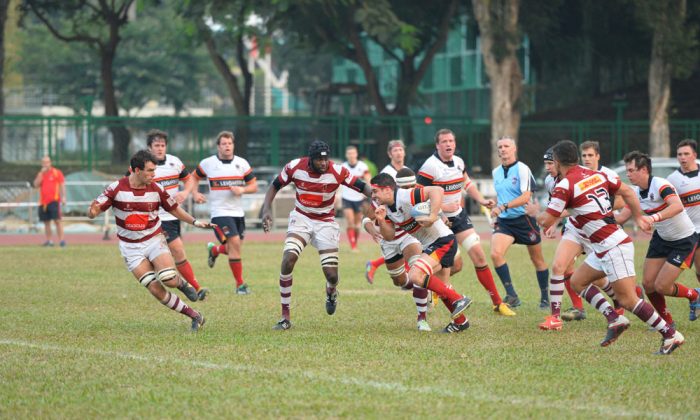 Good wins were had by Newedge Club and WhichWay Valley in the Paul Y Hong Kong RFU Premiership last Saturday Oct 26, but it was the match between Leighton Asia HKCC and Abacus Kowloon that stood out in the crowd.

A stunning 18-7 win for HKCC at the Aberdeen Sports Ground puts the cricketers at the top of the standings—equal on points with the previous week’s leaders Kowloon, but still with a game in hand.

The star match at Aberdeen Sports Ground was a bit of a disappointment. Everyone expected Kowloon to at least be competitive, but it was HKCC with a strong start to the game that dominated most of the match.

“We just did not start. We came down with a game plan, but did not execute it,” Conlin told the Epoch Times after the match.

“To be fair to them they were in our faces from the beginning, but we should have been able to deal with that. But we didn’t, so it’s back to the drawing board.

Ian Wilson, assistant coach for HKCC was pleased with their day’s work.

“We put them under a lot of pressure from the start. It was just a bit disjointed with a few cards in the game, but we are quite happy with a result against a good Kowloon side.”

Wilson was happy about the second half despite some of the referees’ interpretations.

With the HKCC team down to 13 men towards the end of the game, Kowloon pressed hard and managed to score a try.

“We just decided to get guys on their feet, reposition ourselves, make the tackles not compete too much in the ruck and just be offensive and try and make them make errors,” explained Wilson.

“They [Kowloon] have been building some momentum and we have been playing with similar momentum, so it was a real crunch game today and we are quite pleased to come away with a win and look forward to playing them again in the next game.”

Newedge Club chalked up a much-needed win against HK Scottish at Shek Kip Mei in fine style 40-3. The victory puts them on 11 points in the standings and keeps them well in sight of the leaders.

WhichWay Valley also had a good 35-19 win against Borrelli Walsh Tigers at King’s Park, keeping them in third place in the standings on 12 points, just one point ahead of Newedge Club.

Just three points separate first and fourth – with up to five points up for grabs in a big win – making the matches this weekend really important for all of the top four clubs. WhichWay Valley (third) take on Abacus Kowloon (second) and Newedge Club (fourth) play hosts to Leighton Asia HKCC (first). The HK Scottish (fifth) against Borrelli Walsh Tigers (sixth) match will allow one of these to gain a few points in the standings.