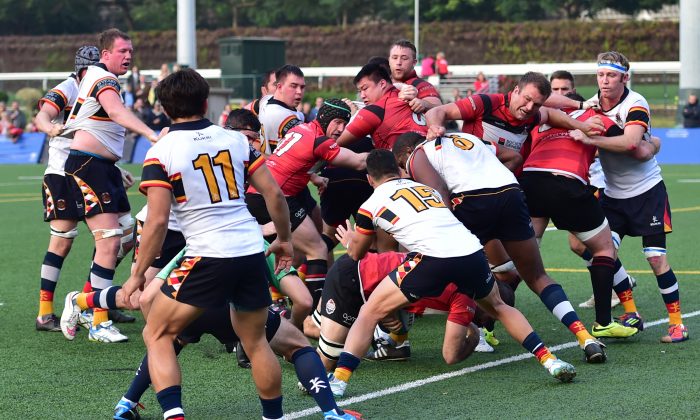 Thomas Lamboley of Valley RFC crosses the HKCC tryline in their HKRFU Premiership match on Saturday Jan 31, 2015 but the score did not count as he was adjudged to have knocked-on. HKCC won the match 12-7 in a tight and exciting second-half play. (Bill Cox/Epoch Times)
HK Rugby Union

HONG KONG—Leighton HKCC held off Societe Generale Valley 12-7 to seal the HKRFU Premiership league and snatch the Broony Quaich from Valley’s grasp. Bloomberg HK Scottish also won (27-15) against NATIXIS HKFC to secure their second place position. Abacus Kowloon scored a narrow victory over Borrelli Walsh Tigers to move them within shooting distance of HKFC in 4th place but even if Kowloon win the head to head with HKFC next week they can only tie on points and HKFC’s try-points difference will still see them maintain the 4th position needed to contest the Grand Championship.

Next week’s league fixtures are therefore a bit of a dead rubber except for the Broony Quaich which will be contested at Aberdeen Sports Ground when HKCC meet HK Scottish. The line up for the Grand Championship Semi-final will be HKCC against HKFC and HK Scottish to play Valley. HKCC and HK Scottish should have home venue advantage.

Valley vs HKCC
The match at Valley-8 between Valley and HKCC last Saturday Jan 31, 2015 was a match of two halves with HKCC showing a superior edge in skills and application scoring two tries. The first into the left hand corner and the second close to the posts the second try was converted to take HKCC onto 12-points.

Valley’s Reece Hamon did get one shot at goal but this was from near the half-way line and although the kick was straight it dropped just short of the posts leaving the half time score 12-0 to HKCC.

Jack Isaac, Valley’s head coach obviously instilled some fire in the players’ bellies during the interval as they came out with more determination spending most of the second half in HKCC territory and putting immense pressure on the league leaders. In the early stages Valley seemed to have the advantage in the scrums and their initial attempts at push over tries from 5-metres out seemed to be the right approach with Thomas Lamboley advancing to the line – but he was deemed to have knocked-on in the process.

Many other pushover attempts over a 20 minute period did not yield any advantage as the HKCC defence held firm. Valley were eventually awarded a penalty try from under the posts which was duly converted by Hamon to give the home team 7-points. But much time had been taken with this one strategy with HKCC sapping the strength from the Valley pack as time progressed. Although Valley mounted attack after attack by Salmon Yiu, Leon Wei and Nick Hewson they were unable to add to their score, with the game ending 12-7 to HKCC.