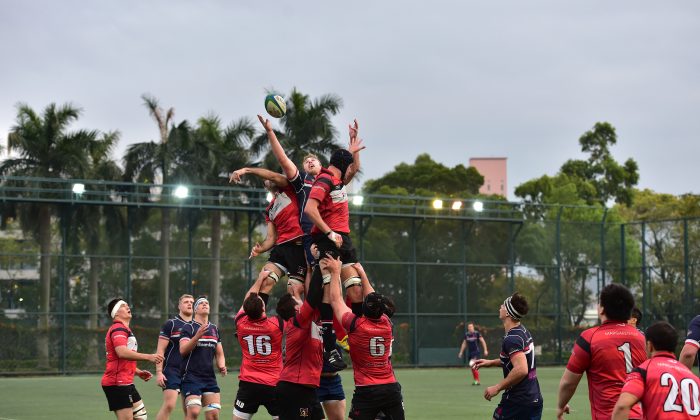 Hong Kong Rugby Football Union domestic league season 2014-2015 draws to a close this coming Saturday March 7 with Grand Championship finals for each division. The top 4-teams heading the leagues have played knock out semi-finals between the top team and 4th team, and the 2nd and 3rd placed teams resulting in a line-up of finals matches to be played this Saturday.

The highlight match for the Premiership Grand Champion will be a repeat of last year’s scintillating line-up when Societe Generale Valley again take on Leighton Asia HKCC. Last year Valley were a close second to HKCC in the league and then went on to claim the spoils in the Grand Championship final. Can they do it again? In the league competition this year HKCC amassed 60 points, 10 ahead of their nearest rivals Bloomberg HK Scottish with 50-points and Valley were just 1-point adrift on 49. So the gap looks larger and perhaps the task more daunting for the Valley squad, but in knock-out matches … it’s all on the day.

Certainly Valley have strength in depth as shown by the number of finals they will compete in this year including Premiership-A, and National Leagues 2 and 3. Valley Ladies will also feature in the Women’s Premier final.

The top matches, Premiership, Women’s Premiership, Premiership-A, Champions League and National Leagues (NL) 1, 2 and 3 will be played at King’s Park while other divisional finals will take place at Shek Kip Mei (NL 4, 4A), So Kon Po (NL 5, 5A) , Valley-8/HKFC (Women’s 10’s and WNL 1).

Final Divisional Standings
The top four teams in each division and the resulting finalists as follows: