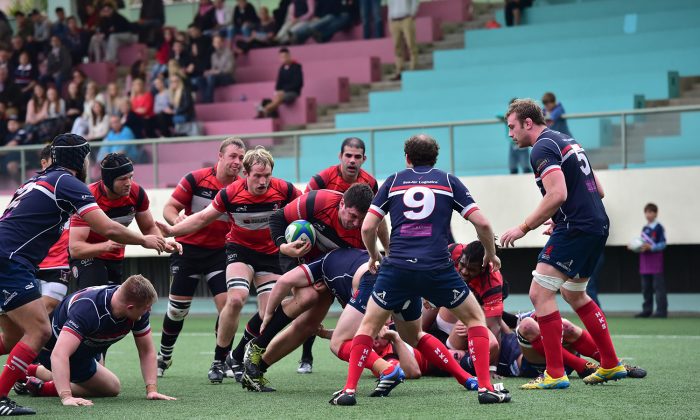 HONG KONG—Leighton Asia Hong Kong Cricket Club (HKCC) and Societe Generale Valley (Valley) won their respective semi-final matches in the Grand Championship play-off of the HKRFU Premiership on Saturday Feb 14, 2015 to move them into the final to be played on Finals Day at King’s park on Saturday March 7, 2015.

HKCC vs HKFC
HKCC found NATIXIS HKFC tough opponents on their home pitch at Aberdeen Sports Ground last Saturday with late chances going astray at both ends of the park. It was a very close match right to the final few minutes with HKCC leading 9-8. Niall Rowark missed a penalty attempt for HKFC which would have taken them into the lead but the kick missed its target while at the other end Jason Kjestup failed to take advantage of two late penalty attempts. But a try on 77 minutes by Flanker Matt Lamming settled the match with HKCC winning 16-8 to take them into the final.

HK Scottish vs Valley
The other semi-final played at Shek Kip Mei was also a tight match bringing enthusiastic encouragement from each team’s supporters.

Valley started fast and put immediate pressure on the home side but they were pushed back with some good HK Scottish place kicking, however an error in the middle of the field by HK Scottish after 15 minutes gave Valley a long penalty opportunity which was struck firmly and true by scrum half Khist Kopetzky to put Valley into a 3-0 lead.

Just a minute later Valley surged forward after winning a line out pushing a driving maul towards the Scottish line. Prop Leon Wei broke away and ran 20 meters for the line to push Valley into a 10-0 lead after the conversion by fly half Ben Rimene.

Thomas Lamboley made a good run from a ‘strike against the head’ on the half way line and made considerable progress before his pass to Dave Vainqueur went astray. But HK Scottish then had some success of their own with Lex Kaleca making some telling surges and a run up the right flank by John Lynn was only stopped just a few metres short of the Valley try line when he was bundled into touch by Valley’s Aldige Jean-Baptiste. Although the ball was handed to Craig Wilson he also was sidelined by Matt Rosslee. A series of fierce confrontations then took place close to the Valley line until Scottish were awarded a penalty for which they took the 3-points.

Valley surged back again with a Rosslee run towards the Scottish line but he was finally stopped and a counter attack by Scottish started by Lynn passing the ball to Kane Boucaut took them back into Valley’s final quarter of the pitch.

After some further play Rimene put Valley back into a great attacking position with a superb grubber kick from the halfway line to take Valley to within 5-metres of the Scottish line. The subsequent line-out was adjudged ‘not straight’ and from the Valley scrum Valley forced their way over the line for Tom Broughton to score. Rimene then kicked the conversion from near the side line to take the score to 17-3 to Valley.

Scottish were awarded a penalty right on half time 30 metres from goal which was slotted over by Bird to make the score 17-6 to Valley at the break.

Scottish made good progress early in the second half and Andrew Henderson with a surging run from the halfway line down the left flank, brushed past several Valley players to score. The subsequent kick by Bird closed the gap to 13-17.

Strong second-half pushes by Kaleca, Boucaut and Craig Wilson moved Scottish forward into good attacking positions and at one time they were again close to the Valley line but they could not finally break through the Valley defence.

Valley’s Kopetzky had a further penalty opportunity towards the end of the match but the ball drifted right of the posts however Valley were again on the ascendancy close to the Scottish line as the whistle blew for full time.

The match was a fine cup semi-final featuring strong pack performances, some fine open running and top class penalty and place kicking, a really enjoyable match which could have ended with either of the committed squads moving on to the final. But on the day Valley just had the edge.