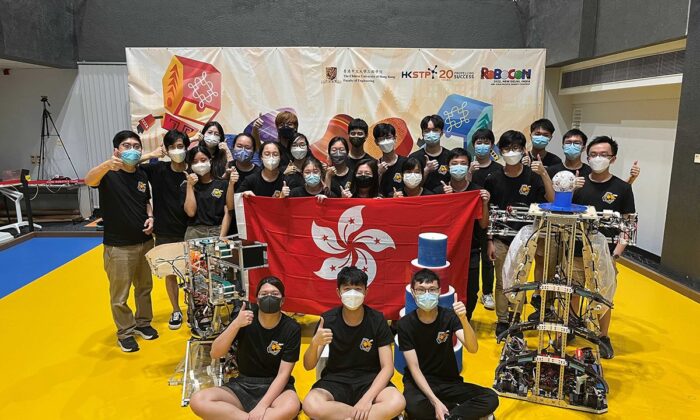 The robotics team of CUHK students, representing Hong Kong, has won the ABU Robocon for the second time. (Courtesy of the CUHK)
HK Current Affairs

The CUHK robotics team won the championship in the “Robocon 2022 Hong Kong Contest” in June, and successfully obtained the qualification to represent Hong Kong in the ABU Robocon. The event was held in New Delhi, India, bringing together a total of 13 regional winning teams from tertiary institutions in 12 countries and territories. The CUHK team has advanced to the five finals in the past.

This year’s competition was held online in New Delhi, India, and gathered a total of 13 regional winning teams from institutions in 12 countries and territories. In the end, the CUHK robotics team, representing Hong Kong, won the Grand Prix Award for the second time.

The theme of this year’s competition was Lagori,  which was inspired by a traditional game in South India. The participating teams needed to design two robots and divide them into seekers or hitters.

When a team played as a seeker, they threw balls to knock over a tower of Lagori discs, made of coloured sponge blocks, and then piled them back up in the original order within a limited time, getting points according to the number of discs knocked down and piled up.

When a team played as a hitter, they needed to fireballs to knock other balls off the top of plinths in four locations around the field to shorten the amount of time competitors had to pile up the discs.

CUHK pointed out that the 360-degree rotation wheel system is the key to winning. The system helped the automation of the robots and gave the robots the ability to automatically move along the planned routes, offering higher maneuverability and speed.

Professor Martin D.F. Wong, Dean of the Faculty of Engineering at CUHK, said that the student team’s achievement in both the regional and international Robocon represents not only their hard work paying off but also the world-class education in engineering getting recognition.

Dr. Crystal Fok, Head of STP Platform of Hong Kong Science and Technology Parks Corporation (HKSTP), said that the victory of CUHK’s robotics team signified that Hong Kong tertiary students are talented, and pointed out that HKSTP would continue to collaborate with world-class local universities to nurture future leaders, who contribute to the growth of Hong Kong’s I&T ecosystem.