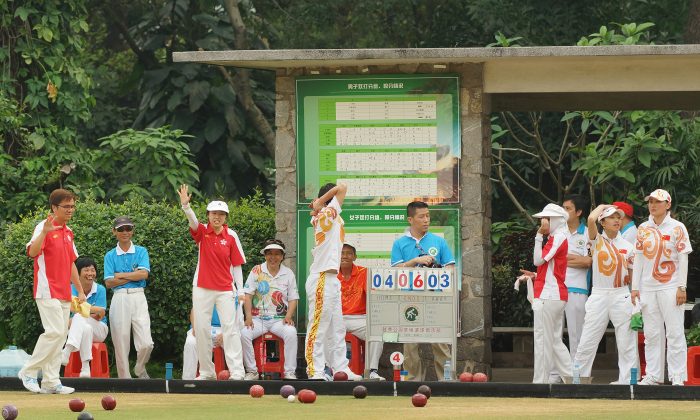 Turning point ... An unlucky shot from Zhejiang gifted the Hong Kong team a five shot advantage in the Final of the Mixed Fours. Hong Kong went on to beat Zhejiang 12:3 to win the title.(Mike Worth)
International

Held in the YueXiu Park, Guangzhou City, China, from May 8 to 11, the inaugural event is open to China’s municipalities, provinces, special administration region, special economic zones and state-owned enterprises. A total of 15 teams joined the tournament, which was divided into men’s Pairs, women’s Pairs and a mixed Fours competitions.

In the men’s Pairs, the Hong Kong team edged pass the group stage in second place. However, their journey terminated prematurely in the Semi-finals when they were beaten 16:7 by Guangzhou, who went on to defeat Shanghai in the Final to become the champion.

The women’s Pairs team fared better in the round robin stage, topping the group to enter the knock-out. They faced the same fate as the men’s team, however, and lost to the eventual champion Guangzhou 14:6 in the Semi-finals.

Believing that the two bronze medals did not truly reflect their real capability, the Hong Kong team put all their focus on the Mixed Fours, the last competition of the event.

Hong Kong’s Mixed Pairs team successfully entered the Final, having lost only one game on the way to set up a final show-down with a young Zhejiang team, which had relatively very little lawn bowls experience.

Incidentally, the Zhejiang team had beaten Hong Kong three times during the course of the tournament – in the men’s pairs, women’s pairs and mixed fours in the round robin stages.

Raymond Ho, skipper of the Hong Kong team, explained a decision to change tactics in the Final game.

“We played them three times and knew what they are capable of,” said Ho. “So a change of tactics was crucial.

“We decided to position our bowl once we are holding a shot and wait for their mistake.”

Apparently the tactics worked because on the 7th end, when the score was tight at 4:3, the Zhejiang skipper Fan Shan misplaced his shot and took away their own bowl to lose five shots, which virtually ended the game.

The Hong Kong team was never troubled again and finished the game 12:3.

Ho attributed their Final success to teamwork and their high level of concentration during the game.

“We were under enormous pressure to perform,” he said.

“We improved our communications in the last game and all players performed their duties well.”

Zhejiang will deservedly receive the plaudits for their performance during the tournament – their players had a total of just eight days of playing experience since they were first introduced to bowls in December 2012, which included two days of introduction training and no practise entering this tournament.

However, with a team made up from the Chinese national bocce team that included seven-time women’s world bocce champion, Gao Xiaomin, Zhejiang were very competitive. But as the team had played one more game than Hong Kong, fatigue and lack of experience took its toll in the Mixed Fours Final and, right from the beginning, it only seemed that they were delaying the inevitable.

Hong Kong finished second on the overall standings behind the Guangzhou team, with Shanghai third and Zhejiang fourth.

The results show that teams from the mainland are rapidly closing the gap with Hong Kong and this should provide food for thought when the Hong Kong Lawn Bowls Association reviews their squad system.