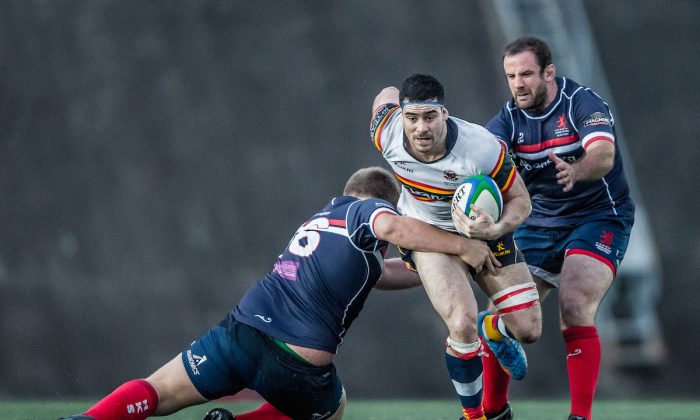 HK Scottish won the Broony Quaich trophy on the opening Super Saturday of the season and have defended it successful ever since.

“The funny thing was at the start of the year no one knew about it. The guys coming in had no idea what the Quaich was, but now we have defended for the fifth time and we haven’t been beaten at home yet this season,” said HK Scottish head coach Craig Hammond.

In the last matches before the New Year break on Saturday Dec 13 HKCC play Abacus Kowloon at Aberdeen Sports Ground while HK Scottish have a tough away match against Societe Generale Valley at Valley 8.

HKFC vs Kowloon
In the head to head battle for the important 4th place Natixis HKFC edged a high scoring match at home against Abacus Kowloon 34-33 to put HKFC on 17 points, just one point ahead of their close rivals. Next week HKFC play bottom of the table Borrelli Walsh USRC Tigers, while Kowloon have a tough match against Premiership leaders HKCC at Aberdeen Sports Ground.

HKFC gained a well needed bonus point by running in 4-tries courtesy of Jason O’Neill, Jamie Hood, Lloyd Jones and Jonny Rees while Fly Half Niall Rowark converted all tries and kicked 2-penalties. Kowloon also scored 4-tries and were awarded a penalty try, but missed out in the kicking department allowing HKFC to chalk up the win.

Borrelli Walsh vs Valley
In this match at King’s Park Societe Generale Valley won the encounter 26-18 to maintain their place on 29 points, 3-points off the lead.