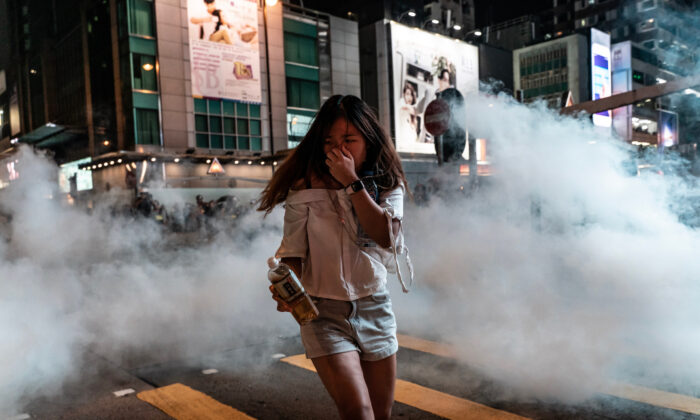 At an Independent Police Complaint Council (IPCC) meeting on 21 June, a representative of the Hong Kong police said that tear gas does not cause health or environmental harm. However, on the same day, the Hong Kong High Court received a claim that tear gas had caused serious damage to a building.

At the IPCC meeting, the police spokesperson said they had received a total of 1,949 complaints related to the Anti-Extradition Law Amendment Bill Movement by the end of May, of which over 30 percent (618) were general complaints and 263 were serious allegations, including police abuse of power, assault, and intimidation.

Regarding the use of force, the police put out a brief in the follow-up to the IPCC’s recommendations on using force. The statement said the police didn’t consider tear gas harmful to health or the environment and there was no need to set up an expert committee to follow up on the toxicological level of tear gas, and that given Hong Kong’s environment, the police will consider the use of other weapons in the future.

But on the same day, the High Court heard a claim relating to tear gas damage. Dr. Kam Chung Kenneth Leung, an ear, nose and throat doctor, filed a writ against the Commissioner of Police.

On November 18, 2019, during the demonstrations the police fired 3293 tear gas rounds at protestors at Polytechnic University, according to the writ, there was “misfiring of two tear gas submunitions” causing serious damage to the two units in his clinic in the Tsim Sha Tsui district in Hong Kong. According to a letter issued by the Fire Services Department in 2021, the blaze happened because the heat from the tear gas caused flammable objects in the units to burn, hence Dr Leung was seeking HK$6.72 million (about $856,000) in compensation from the Commissioner of Police.

The police claim that tear gas is not a health hazard is clearly not credible. During the Anti-Extradition Law Amendment Bill Movement (anti-ELAB), numerous Hong Kongers shed tears and choked on the gas shrouding the scene. Afterwards, their skin was covered in a red rash and blisters, some even coughed up blood or had bloody stools, and there were many bird corpses at the site of the tear gas grenades.

The Hong Kong Journalists Association collected 17,000 questionnaires from 29 November to 2 December 2019. The responses showed that 18 to 23 percent of the respondents suffered from symptoms like difficulty breathing, itchy skin, and constant watering of the eyes from the tear gas. About 17 percent had skin rashes, blisters, and pus, mainly on the face, arms, and neck. Around 14 to 16 percent reported stomachache or diarrhea, and 5 percent of the respondents had serious symptoms such as coughing up blood, bloody stools, and abnormal urine color.

In October 2019, the Hong Kong police admitted to using “tear gas made in China.” A female protester at a rally in December of the same year said that since the police switched to made in China tear gas, “after I inhaled it, I was coughing up blood the next day and I started to have a fever.” For the next three months, she did not have a regular menstrual cycle, “not without blood, but with a small amount for two or three days, but the blood was black.”

Earlier, the Hong Kong Police also admitted to using “expired tear gas.” Dr. Karen Mak, a lecturer in the Faculty of Science at the University of Hong Kong, explained in an interview with public broadcaster Radio Television Hong Kong (RTHK) that the CS gas, which is the main component of tear gas, should be valid for three to five years and is a complex chemical structure that may degrade over time. It cannot be ruled out that other toxic gases, such as Cyanide and phosgene, will be released after the tear gas has been fired and heated.

Annals of the New York Academy of Sciences, a long-standing academic journal, published a review of tear gas in 2016 saying that tear gas is a sublethal incapacitant weapon with long-term health effects, and can cause respiratory disease, skin burns and dermatitis, eye damage, cardiovascular and intestinal disease, major injuries, and even death.

During the 2019 Anti-Extradition Law Amendment Bill Movement, the intensity and the duration of the tear gas being fired by the Hong Kong Police has rarely been seen in history.