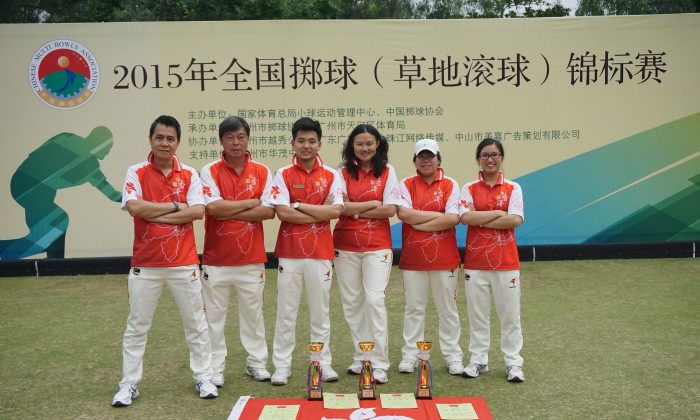 Hong Kong displayed their supremacy against their Chinese counterparts by winning three out of the four disciplines at the 3rd Chinese National Lawn Bowls Championship in Guangzhou last week.

Held in the Yue Xiu Park, Guangzhou City, China, from March 26 to 28, the event is open to China’s municipalities, provinces, special administration region, special economic zones and state-owned enterprises. This year a total of eight entries were registered, including the usual participants Macau, Shenzhen, Guangzhou, Henan and Quzhou.

Hong Kong was represented by the reigning National Triples champion Timmy Kwong and 20-years-old Ken KK Chan, who made his debut for Hong Kong. For the ladies it is a more experienced side that consisted of two Asian Championship gold medallists, Helen Cheung and Vivian Yip.

The singles, which started on the first day of the tournament, had 16 participants in each gender and competed in a single knock-out format. Under a spontaneous downpour the two Hong Kong men did not adapt well to the changing pace of the green and both got knocked out in the first round.

There was not much problem for the Hong Kong ladies though. Both Cheung and Yip won all their games and met at the final in the following day.

As both players are quite familiar with each other’s playing style, the final was quite a tight game. After being tied at 3:3 in the 5th end, Yip took five shots from the next three ends to open up the gap. Cheung tried hard to cut the difference, but until the end she could only cut it to two shots. Yip won the game 12:10 to register her second Singles champion title on the soil of China.

The duo maintained their good form in the Pairs competition which followed, won all the games in the round robin stage and progressed to the semi-finals. They dispatched the Henan team, which consisted of a teacher and student from the Henan Institute of Science and Technology, with ease.

In the final Hong Kong faced Shenzhen who, surprisingly, defeated hot favourite Guangzhou in the semi-final.

Maybe Shenzhen had used up their luck in the semi-final, the final was a one-sided match with Hong Kong winning seven consecutive ends from the beginning. Shenzhen broke the deadlock in the 8th end with a consolation shot and settled for runners-up.

For the Men’s Pairs, the combination of Timmy Kwong and Ken Chan can only finish second of the group, after losing to Guangzhou and drawing with Macau.

Hong Kong met Macau again in the semi-finals. It seems that history may repeat itself when Macau took the first two ends by one shot each. However, the Hong Kong team obviously learned from their early setback and maintained their focus. The pair took the following six ends to virtually kill the game.

Guangzhou, who has dominated the competition in the last two tournaments, was left red-faced when their strong men’s pairs-team was knocked out in the semi-final by the inexperienced bowlers from Quzhou.

Hong Kong started the game in shaky fashion, won four shots in the first end and lost three in the following end. After winning the third end by three shots, the Hong Kong team changed their tactics to play long ends and completely disrupted the rhythm of their inexperienced opponents. They kept the momentum to finish the game 17:4.

Debutant Ken Chan is very happy to collect a trophy on his first cap: “Representing Hong Kong is a great honour already and it is even more treasurable to strive for Hong Kong on the first go.

“After suffering from an early defeat in the singles due to unfavourable weather conditions, I and my partner Timmy were determined to triumph in the pairs. We maintained our consistence and teamwork throughout, I guess these are the keys for our success.