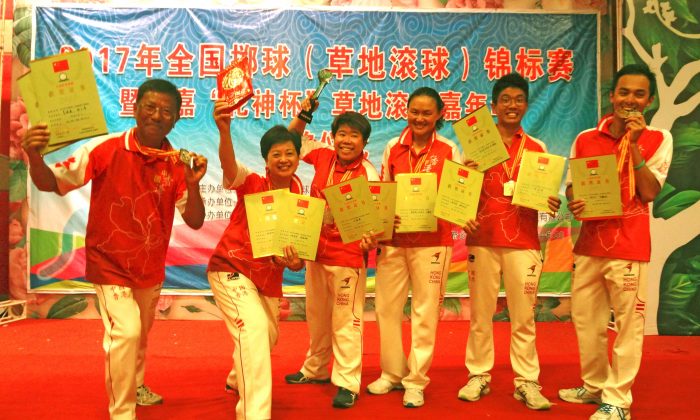 HONG KONG—After having learnt a lesson the hard way at the 2017 Gold Coast Multi-Nations event earlier this month, the Hong Kong team recaptured some of the confidence by demonstrating their dominance over their Chinese counterparts at the 2017 Chinese National Lawn Bowls Championship in Henan last week.

The team of six that went to China included five of the members who returned from Australia, where they finished bottom in half of the disciplines.

Held in Huojia County, Xinxiang, China, from June 13 to 17, the event was open to China’s municipalities, provinces, special administration regions, special economic zones and state-owned enterprises. This year a total of 12 men’s teams and six women’s teams participated the event which included the usual participants of Macau, Shenzhen, Guangzhou, Henan and Quzhou.

In the men’s singles, James Po won all the games to capture the first gold for the team. Followed by Vivian Yip who also won the gold in the women’s singles, despite losing a game to Quzhou in the round robin stage.

The men’s pairs of Adrian Yau and James Po won all the round robin games to progress to the final, but was then defeated by Quzhou 9-15 and had to settle for silver.

The women’s pairs only drew one game with the Yanggu County team from Shandong on their way to the gold medal.

The players maintained their good form in the Triples competition that followed, winning all the games in the round robin stage to progress to the final. The men’s team defeated Shenzhen 13-2 to lift the gold while the women lost 14-8 to Quzhou to finish second.

While Hong Kong is jubilant about the good results, it also showed that China is gradually catching up, according to Vincent Cheung, President of the Hong Kong Lawn Bowls Association, “China only started lawn bowls about 20 years ago and we have seen fast development of the sport already, with the construction of a number of new greens in recent years. Given that they still do not have a systematic approach to promote the sport nor offered opportunities for the players to gain experience, their performance is quite good already.

While Hong Kong is willing to offer help with the development of lawn bowls in China, our player also need to improve themselves to maintain such a leading edge against the rest in the region,” said Cheung.

This week in lawn bowls.

The Premier league continues this Saturday June 24 starting at 2:30pm at all greens in Hong Kong.