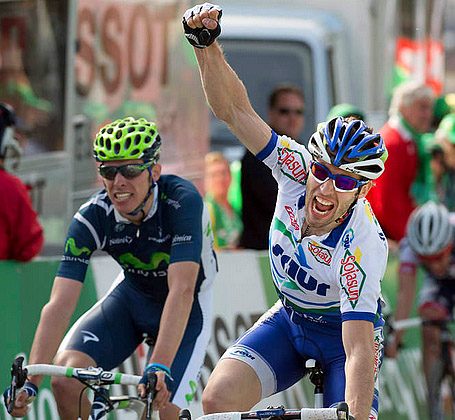 Jonathan Hivert of Saur Sojasun won the final sprint of Stage Two of the Tour of Romandie. Saur Sojasun
Cycling

Jonathan Hivert of Saur Sojasun won the final sprint of Stage Two of the Tour of Romandie after a hilly stage slowed the pure sprinters. The 149-km stage contained a Cat 3 and two Cat 2 climbs which offered great platforms for launching attacks but also trimmed the peloton to about fifty by the time it reached the finishing town of Moutier.

Two riders—Lars Bak of Rabobank and Christian Meier of GreenEdge—attacked 40 km into the stage but never got more than four minutes ahead. Sky led the peloton on a leisurely chase as several riders made leisurely attacks, all of which came to nothing until Fabrice Jeandesboz (Saur Sojasun) and Peter Stetina took off near the crest of the final climb. Meier cracked on the ascent, and Bak didn’t last much longer, leaving Jeandesboz and Stetina to try to stretch their lead.

Sky didn’t really accelerate until the final ten kilometers; GreenEdge and Europcar then moved up and really picked up the pace, catching the two escapees four km from the line.

From there it was a matter of which non-sprinter could get the best position for the sprint. Movistar’s Rui Costa got an early lead but Saur-Sojasun’s Jonathan Hivert passed him at the line.

Race Leader Bradely Wiggins didn’t contest the sprint; his yellow jersey was in no danger, so he rode home contentedly a couple of dozen riders back.