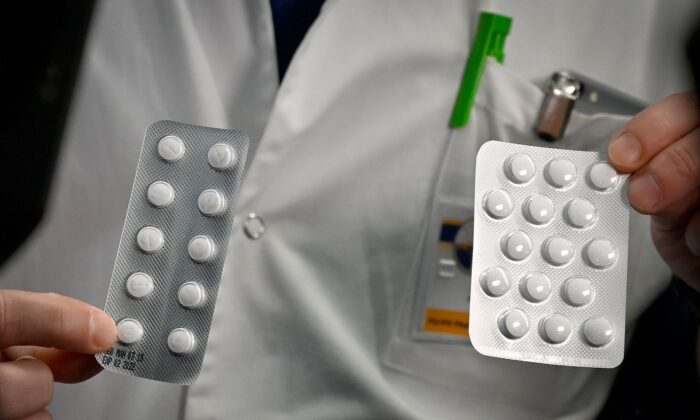 A medical staffer shows tablets containing chloroquine, one of the drugs being tested in Canada and other countries to treat COVID-19, in Marseille, France, on Feb. 26, 2020. A clinician-scientist in Toronto is leading a study on a drug used to treat HIV infection as a potential treatment for COVID-19. (Gerard Julien/AFP/Getty Images)
Canada

An infectious diseases doctor in Toronto is heading up clinical trials of an antiretroviral drug used in the treatment of HIV infection to determine if the same therapy can be used to treat COVID-19.

A combination medication called lopinavir/ritonavir, the drug is used to prevent HIV from developing into the deadly acquired immune deficiency syndrome. Dr. Darrell Tan, a clinician at St. Michael’s Hospital who treats his HIV patients with the drug, is the principal investigator in the trials.

“[The drug] is what we call a protease inhibitor, and it works against a virus by blocking the activity of an enzyme that the virus needs in order to propagate itself—a key part of the virus’s own life cycle,” Tan said in an interview.

“So by blocking it, you block the virus from replicating itself. HIV is an example of a virus that has a protease that’s important to its lifecycle, and so does this coronavirus.”

Tan said earlier research indicated the drug had some effect on novel coronaviruses “in the test tube and was studied against the Middle East Respiratory Virus, or MERS, and there was some model data to suggest that it worked in animal models of MERS infection.”

While a March 18 paper published by Chinese doctors in the New England Journal of Medicine found no aggregate difference between patients given standard care for COVID-19 and those prescribed lopinivar/rotinavir, Tan said the same research indicated there could be some benefit with early intervention.

“If you were to give this drug to people way earlier in the course of disease before they become very ill—that’s in a way exactly what our trial is trying to do,” he said.

“We’re trying to look at post-exposure prophylaxis and see whether we can prevent clinically apparent infection and illness in people who have just been exposed, which is the earliest you can possibly get in the natural history of this infection.”

In conjunction with Sunnybrook and Toronto General hospitals in Toronto and St. Paul’s Hospital in Vancouver, Tan is seeking 200 people for the trials who have tested positive for the coronavirus. From there, the study will also involve individuals exposed to the 200 virus carriers.

In total, the study will involve around 1,220 people and results could be known as early as mid-July.

Tan’s study received Health Canada approval on March 21, five days after a clinical trial for anti-malaria drug hydroxychloroquine began at the University of Minnesota in Minneapolis.

“We’re trying to see if providing medication shortly after exposure either prevents you from going off to develop [COVID-19] infection, which would be nice, or if you do develop infection it’s milder,” said Dr. Matt Pullen, a University of Minnesota researcher working on the hydroxychloroquine trials.

“And then the other group we’re looking at is called pre-emptive treatment, people that have developed symptoms after an exposure or who have tested positive after exposure … it’s kind of modelled after post-exposure prophylaxis provided to someone who’s been exposed to HIV or Hepatitis C.”

The third branch of the Minneapolis/Canada hydroxychloroquine study is “pre-exposure prophylaxis” for high-risk professions like emergency room physicians, paramedics, and first responders, Pullen said, and the medication is provided “for a month at a time at a once-weekly or twice-weekly dose to see to see if this might help prevent them from becoming infected.”

Trials are known as controlled-random-placebo, which means everybody who enrols has a 50/50 chance of receiving hydroxychloroquine versus a placebo. “That helps us get a better idea of if it’s actually working or not,” Pullen said.

A study released last month analyzing the use of hydroxychloroquine in U.S. veterans’ hospitals found no evidence that the drug is effective against COVID-19. U.S. Secretary of Veterans Affairs Robert Wilkie later said the nationwide study, which wasn’t peer-reviewed, was done on a small number of veterans in the last stages of life. He noted, however, that the drug “has been working on middle-age and younger veterans.”

In Arizona, doctors with the Association of American Physicians and Surgeons are urging the governor to rescind his executive orders forbidding hydroxychloroquine prescriptions for the prevention of COVID-19.

The doctors cited observational data through April 20 from multiple countries where about 2,333 patients were treated with hydroxychloroquine, some in combination with zinc or azithromycin. Of those, 91.6 percent improved clinically.

Associated health risks with taking hydroxychlorquine include nausea and vomiting for some, and abnormal heart rhythm when taken in concert with other heart medicines.

According to University of Minnesota’s principal researcher Dr. David Boulware, who posts details regularly on Twitter, as of May 3, 1,290 participants “have had no serious adverse events due to hydroxychloroquine.”

“It’s a widely available drug, but with the caveat that you should take it under the direction of or the advisory of a medical professional,” he said.

“Early on there was a rush and even in the United States there were doctors prescribing it for themselves and their family, without much forethought about the risks … because there is sizeable populations that could have serious side effects based on their medical history, so in that sense it’s a riskier drug. But the average person, especially taking it for a short period of time, it’s a very safe drug.”

Both hydroxychloroquine and lopinavir/ritonavir are generic drugs, widely available and very cheap by comparison to brand-name pharmaceuticals being tested to treat COVID-19 like Gilead’s Remdesivir. Remsdevir didn’t do well in tests against Ebola but is being touted by the World Health Organization as the “most promising candidate” for treating COVID-19.

The tandem hydroxychloroquine trials with the United States make up a fraction of 23 Health Canada-approved coronavirus therapy trials currently underway in Canada.