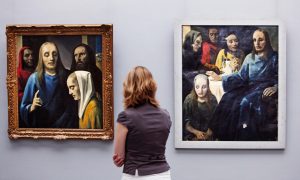 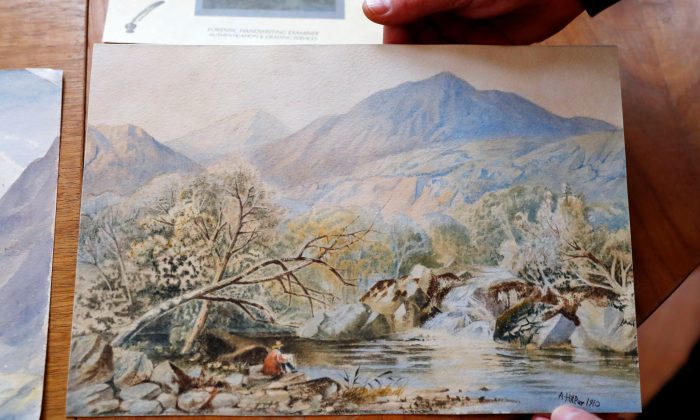 A watercolor of an unknown landscape attributed to Adolf Hitler at Kloss action house, pictured before it was seized by police as a suspected forgery, in Berlin on Jan. 24, 2019. (Reuters/Fabrizio Bensch)
Europe

Three watercolor landscapes said to be painted by Adolf Hitler have been seized by German police as suspected forgeries just as they were about to be sold at action.

Berlin police seized the landscape paintings from Kloss auction house Jan. 24 in an investigation into “attempted fraud” and “falsification of documents.”

Two of the paintings are set in the Alps, one on the Rhine river.

Before the outbreak of World War I, Hitler scraped a living by painting landscapes on canvas and postcards in the city of Munich. He claimed to have produced as many as three a day.

So far the auction house has declined to comment, and no arrests have been made, according to reports.

The three paintings had acquired certificates of authenticity within the last two years.

The newspaper also casted doubt on the signatures, which aren’t in a painter’s fluid style, and which are known to have been forged in the past.

“His former business partner, Hanisch, in the 20s and early 30s eagerly produced images with the same style as Hitler and signed them with the name of the now prominent party leader.”

Welt pointed out the signatures on the seized paintings look completely different from the few samples of Hitler’s signatures from before 1914.

Before the police seized the paintings, Heinz-Joachim Maeder, a spokesman for Kloss auctioneers told Reuters, “In my view they have no artistic value—it’s simply adequate craftsmanship. The value of these objects and the media interest is because of the name at the bottom.”

“If you walk down the Seine and see 100 artists, 80 will be better than this,” Maeder said.

Hitler allegedly ordered his artwork to be tracked down and destroyed, according to the BBC, but several hundred are known to still exist, many of which are held by the U.S. Army in a collection that has never been exhibited.