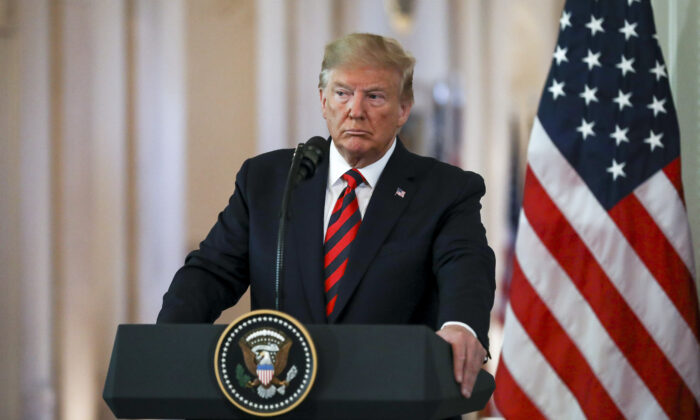 President Donald Trump at a press conference in the East Room of the White House in Washington on Sept. 20, 2019. (Charlotte Cuthbertson/The Epoch Times)
2020 Election

Historically Accurate Model Predicts Trump Could Win in a Landslide

Moody’s Analytics, which has accurately predicted who will win the presidency in past years, said that President Donald Trump will handily beat his opponents and will secure another four years in the White House in 2020.

Since 1980, Moody’s has been able to accurately predict who was going to win the presidency except once: the firm didn’t see that Trump would win in 2016.

“In our post-mortem of the 2016 presidential election model,” the report said (pdf). “We determined that unexpected turnout patterns were one of the factors that contributed to the model’s first incorrect election prediction.”

After averaging three of its models, “Trump would hold on to key industrial Midwest states and pick up New Hampshire, Virginia and Minnesota, assuming historical average nonincumbent turnout.”

But if the turnout is higher than predicted, it becomes more unclear, said Moody’s.

The forecaster made note that the economy is typically a major issue, if not the No. 1 issue, among voters.

“The economy may not be top of mind for voters in every election, but it is hardly ever further than a close second. This is the principle underpinning Moody’s Analytics presidential election models,” it said.

As such, if the U.S. economy stays strong, Democrats will need to have a record turnout to win the presidency.

“Under the current Moody’s Analytics baseline economic outlook, which does not forecast any recession, the 2020 election looks like Trump’s to lose,” the authors of the report said. “Democrats can still win if they are able to turn out the vote at record levels, but, under normal turnout conditions, the president is projected to win.”

In each of the three models used by Moody’s, Trump receives at least 298 Electoral College votes.

The “pocketbook” measure, which factors in how people feel about their finances, shows that Trump would win in a landslide and take 351 Electoral votes.

“If voters were to vote primarily on the basis of their pocketbooks, the president would steamroll the competition,” the report said.

“If the U.S. economy sticks to our script over the next year, record turnout is vital to a Democratic victory … While there is a growing consensus that the 2020 election could buck all norms in terms of overall turnout, which party will be the most successful at turning out voters in key states could be the difference between winning and losing. Turnout in key Electoral College states, particularly industrial Midwest states,” the firm wrote.

About six months ago, another firm predicted Trump would win in a landslide in 2020.

TrendMacrolytics, a research firm that predicted Trump’s 2016 election win, unveiled their model (pdf) for the upcoming presidential election on March 15, that predicts Trump will be re-elected by a margin of 294 electoral college votes if the election were held today. It also predicted that if the Republican candidate was someone else, like Mike Pence, that person would win by 214 electoral college votes.

Donald Luskin, the chief investment officer of TrendMacrolytics, told Politico that a strong U.S. economy is the main factor behind the prediction, coupled with the historic advantage for running again as the incumbent president.

“The economy is just so [expletive] strong right now and by all historic precedent the incumbent should run away with it,” Luskin said. “I just don’t see how the blue wall could resist all that.”