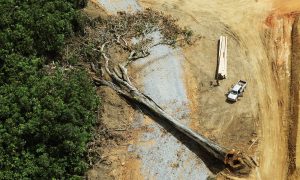 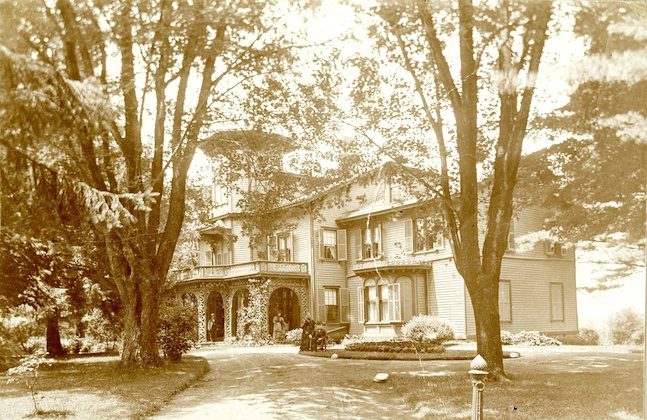 A view of Acorn Hall from the driveway, c1900. Augustus Crane is seated with his wife Mary Crane standing beside him. (Courtesy of Morris County Historical Society)
US

How Trees Tell the Story of 19th Century Millionaires

MORRISTOWN, N.J.—Trees are important because of their ecological role in providing oxygen, improving air quality, preserving soil, and supporting wildlife, among many other benefits. But in the wealthy historic town of Morristown, N.J., trees are valuable for their ability to tell a story and preserve the history of a once treasured time, the Gilded Age.

Renowned for its enormous industrial, urban, and agricultural growth, the pre-20th century Gilded Age brought more wealth to some immigrant families than they could ever have imagined. One of the ways these new ultra-rich “Americans” displayed their riches was through extravagant mansions and landscapes.

Although over 100 years has passed, the rich history of elegant landscapes is not forgotten, thanks to the work of two women who are taking it as their responsibility to preserve a landscape as it was. Through their work for the Morris County Historical Society they are stewards of Acorn Hall and its six acres.

Today, they are leading a passionate effort to replant the little-known historic forest, originally located behind Acorn Hall, that was destroyed by Superstorm Sandy in October 2012.

Amy Curry, 39, director of the society, and Heather Emelander, 61, president of the board of trustees, are combining their professional backgrounds in natural resources, forestry, and horticulture to ensure that the original integrity of the forest is restored. “We lost our entire woods to Sandy,” said Curry.

Curry and Emelander are committed to ensuring that the wishes of the last resident of Acorn Hall, Mary Crane Hone, are honored, so that the significant historical land stays as beautiful as the mansion that sits upon it.

The society’s forest is a mere four acres, compared to the hundreds of acres occupied by a single wealthy family during the Gilded Age, which got its name after Mark Twain and Charles Dudley Warner published their 1873 novel, “The Gilded Age: A Tale of Today.” It satirizes greed and political corruption masked by a thin gold gilding.

For the people of the 19th century who lived off the land, preserving nature and the environment was a way of life.

Gilding refers to covering a cheaper metal with a thin layer of gold. Due to the rapid growth of industrialization, American wages skyrocketed by 60 percent between 1860 and 1890, drawing in a massive number of immigrants.

Morristown was the center for aristocratic life in New Jersey, attracting wealthy businesspeople from New York City who built their summer homes there.

For the people of the 19th century who lived off the land, preserving nature and the environment was a way of life, and so it was only natural that they would be gentle to their environment.

Ensuring the readers that the garden was not an imitation, the article explained, “It embraces several acres, and whatever flower blooms in Japan that will bloom here, grows there.”

This is but one example of the fascination with nature’s beauty. The article would go on to tell about the fad of transplanting forest trees by having them transported from all parts of the world on specially built wagons. “It is as if they sought to assemble in convention the hamadryads of the world,” it states, referring to a Greek mythological being that is born bonded to a certain tree.

People actually relocated trees from around the world to ensure that their landscapes were the most beautiful. Featured trees were selected for their flowers or color.

Although this extravagance was done for the pleasure of men with millions for only two months a year during the summers, it was also practiced on a smaller scale by gentleman farmers.

Acorn Hall, a beautiful 1853 Victorian Italianate mansion, was named for a large red oak that previously was located just to the west of the building. It was once the home of a self-labeled gentleman farmer, Augustus Crane, and his descendants—the Crane and Hone families.

Although originally built for a New York doctor and his family in 1853, the original nine-acre property became the home of the Crane family in 1861. The Cranes modified the original house into its current architecture style, and the subsequent families made very few modern updates—inside or out—throughout the more than 100 years that they resided there.

Crane tended a mixed fruit tree orchard on the property and raised small animals and horses. Three of the nine acres that he originally owned are the site of a Revolutionary War powder mill, which the last owner Mary Crane Hone donated to the Park Commission.

Curry points out that the property is not only culturally significant for the families that lived in Acorn Hall, it’s also significant for the history of Morristown. “People used the land,” stressed Curry. If you don’t preserve the land, the house will “only tell half the story.” The historic carriage house also adds to the story. It houses original farm equipment, a horse carriage, and other historical items used by the families.

Although existing records don’t verify that these families ever had a garden, the Home Garden Club of Morristown, a group of dedicated gardeners, donate their time and skills toward maintaining a Victorian garden located behind the mansion.

The club has primary responsibility for planting, pruning, watering, and beautifying the garden, under the watchful eye of the society. The garden is appropriate for this property, as most Victorian homes would have had a garden of some kind.

Curry and Emelander together form their own variation of the old adage “half pudding, half sauce.” Each comes with a unique background and experience to add to the mix of their shared knowledge about nature and the environment.

Emelander’s knowledge of low growing plants combined with Curry’s knowledge of trees are both necessary to plan the successional stages of a new forest. “We’ve been a phenomenal team,” boasts Curry.

“We have as much of a stewardship responsibility to the ground that the hall sits on,” she explained, “You can’t have one without the other. We wouldn’t let the hall fall down, how can we let the ground that it sits on decline.”

When Curry was first hired in January 2012 to head the society, she expected to utilize her graduate studies in historical interpretation and environmental history for the director position. Little did she expect that her certification in arboriculture—knowledge of all types of trees as well as all the different insects that damage them—would become a crucial skill-set in her new position.

“We have six acres so there is some kind of natural resources management that has to happen on site,” she figured.

But just 10 months after Curry had begun to settle in to her new role, the unimaginable happened—Superstorm Sandy swept in and completely destroyed not only the four acres of beautiful, picturesque woods, but the well-manicured Victorian garden as well.

“Having a background in natural resources was more important than I ever thought it would be. Now trees and forest management was going to become a major issue,” Curry said.

Among the trees that were destroyed, some were more than 100-year-old native Ash trees and tulip trees, which indicates that the land was still appreciated even after the Gilded Age.

In describing the forest pre-Sandy, Curry sings, “It was beauuutiiiiiful; it was absolutely beautiful.”

Looking back on her reaction upon seeing the tumbled down trees, Curry recalled, “We knew that this organization could not pay for those trees to be replaced. We didn’t know at that moment if they were just going to live like that forever.”

She notes that it was one of three urban forests in Morristown and a vital space for outdoor recreation.

Acorn Hall’s property and structures help us map our heritage as a country and a county.
— Heather Emelander, president of the board of trustees, Morris County Historical Society

Local walkers and joggers have said they miss the access to Patriot’s Path through the society’s forest. The path links to “several dozen federal, state, county, and municipal parks, watershed lands, historic sites, and other points of interest across Morris County,” according to the Morris County, N.J., Park Commission website.

“As an early example of suburban landscapes, Acorn Hall’s property and structures help us map our heritage as a country and a county,” said Emelander in the society’s “Oak Leaves” newsletter.

Curry credits Emelander for reaching out and connecting with many contacts to get funding and cleanup assistance.

Emelander, who has been a member of the society since 2005, is a master gardener and owns a landscape gardening business. She contributes countless volunteer hours to the replanting mission of this dynamic duo. With her horticulture skill-set and close ties to the community she has brought in the right professionals who can properly plan the long-term management of a forest.

Over the past several months, Curry and Emelander have been arduously planning a spring event to raise funds for the replanting. The Giving Trees Gala will be held on April 30 at the Westin Governor Morris to raise funds for purchase, transportation, and planting of trees native to Northern New Jersey, as well as to help defray the cost of historic landscape designers and forestry professionals.

But the work doesn’t stop with the planting of trees. The management of the various stages of the reforestation will continue for many years to come and Emelander is hopeful that the society will get help.

“We hope for support from our membership and the surrounding community who frequent our grounds and Patriot’s Path,” she said.

For more information about the gala or to make a donation, contact the Morris County Historical Society at 973-267-3465.