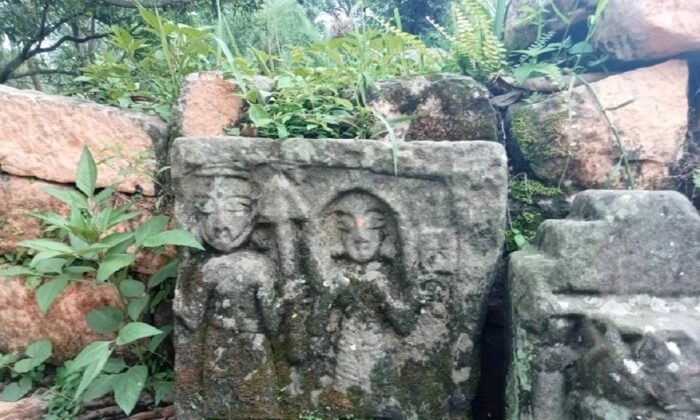 Historical ruins scattered near the temple at Gurnal, an ancient site on an old trade route to India on July 24, 2021. (Venus Upadhayaya/Epoch Times)
India

JAMMU, India—An undated historical Himalayan site of ritualistic bath spaces and built springs, abandoned on an ancient trade route to India is at the peril of getting lost forever if the government of India doesn’t pay attention.

The picturesque village of Gurnal, the site of ritualistic bath spaces and of hundreds of ancient springs called “bowlis” built on the banks of the stream Naj, a tributary of Ujh of the Indus system, was being constructed like the other sacred cities that exist on the banks and confluence of many historic rivers in India. However, for unknown reasons, it was abandoned before completion.

Sahana Singh, the author of the book, “Revisiting the Education Heritage of India,” told The Epoch Times that these ancient cities on the banks of rivers were often on ancient trade routes, were truly cosmopolitan, and “were once the knowledge-centers of India since many great sages, poets, and musicians resided in them or spent at least a few years of their lives there and composed their masterpieces, which are studied to this day.”

Gurnal literally means an abode of gurus or masters or wise ones on the banks of a stream (nala), which according to Indian historian Mahendra Pathak, an author of three books on India’s ancient history and culture, is indicative of the ancient Upanishad tradition of India.

“Birth of civilizations has happened on river beds. Upanishad tradition mentions residence with gurus (masters) and attainment of “gyan” (knowledge). Ancient Saraswat literature mentions that in such ambiance even a lion and deer forget prey-predator instincts and drink water together,” Pathak told The Epoch Times on phone.

The Sanskrit word Upanishad is derived from the root Sad (to sit) and two prefixes Upa (nearness) and Ni (totality)—it thus means sitting nearby devotedly.  Upanishads are late Vedic period Sanskrit texts and 108 of them are known.

The larger region of Jammu has folklore linked to a king setting up Jammu City after watching a lion and a deer drinking water together, which was indicative of a place with a peaceful future. There is an installation at a major public square in the Jammu City (72 miles from Gurnal) today commemorating the same.

Dr. Sindhu Kapoor, dean, Faculty of Social Sciences, Cluster University of Jammu told The Epoch Times on the phone that Gurnal might help unfold many truths about the civilizational history and heritage of the Himalayas, if it is preserved.

“There are many heritage sites in this region. They are either neglected or waiting to be discovered by the rest of the world. We’ll lose them if we don’t take timely efforts to preserve and conserve them,” said Kapoor requesting that the Indian government pay attention to the site.

Pathak said that the Gurnal site near the current township of Billawar was likely on the trade route from Kandahar to Delhi. Billawar, colloquially called Bilaur, is mentioned as an ancient town in many ancient records, including in Rajtarangini, the ancient history of Kashmir in Sanskrit, according to Prof. Shiv Datt Nirmohi, an author of 40 books on the history of Jammu.

Locals said en route to Delhi, a contingent of the army of Babur, who started the Mughal dynasty that ruled India for 235 years before the British took over the subcontinent, passed through this route.

B.R. Upadhayaya, a senior citizen from Billawar and a former divisional forest officer told The Epoch Times that about a mile from Gurnal there’s a place called Babrey da nal (river crossing named for Babur) from where a portion of Babur’s army passed en route to Delhi.

Babur took over Kandhar (today’s Afghanistan) in 1507 and he conquered Delhi in 1526. Prof. Pathak said his army would have passed through this route to India.

Prof. Pathak, who’s also an associate professor of ancient history at the Saket College in Ayodhya, talked about how Kandhar was at the entrance to the Indian subcontinent for 6000 years. While from Kandhar routes bifurcated to Central Asia and the Middle East, other trade routes came all the way to central India.

There are other ancient sites and historical sites extending within 100 miles from Gurnal. The closest is in Billawar town itself, on the opposite bank of Naj—an ancient temple built in Nagara or North Indian style of ancient Indian architecture which at places is also referred as Indo-Greek style.

The Billawar temple, where worship still takes place, is already protected by the Archeological Survey of India but is also in need of care. Billawar was also on an ancient route from Kashmir to Haridwar, a town on the bank of the Ganges where Hindus perform life and death rituals even to this day.

At Gurnal some local accounts believe there are 108 springs, while others say there are more than 365. A book on Billawar’s history and culture written by Shiv Doblia, mentions 365 springs.

The Epoch Times had to wade through a wild stretch of vegetation and streams to reach the site that today consists of a few springs, big and small, all waiting for attention from historians and authorities.

The site is littered with ancient remains—carved stones that have oral lore linked with Mahabharata and post Mahabharata periods. Mahabharta is a Sanskrit epic of India that narrates the story of the struggle between two groups of cousins leading to a war of world war proportions.

The historicity of Mahabharta is disputed as some consider it to be mythology, nonetheless, many sites in the Himalayas, including Gurnal, have folklore linked to Mahabharta.

“Whether or not one believes that the events of the Mahabharata happened, their stories are a part of Indic consciousness and especially for the rural Himalayans who have not been converted out of Hinduism,” said Houston-based Singh.

The one visited by women on special days has foundations of four pillars built for holding a citadel that doesn’t exist now. The whole bath space is completely walled with a small door facing the stream.

Dr. Kapoor said that a noted expert on ancient Indian history, the late Prof. Y. B. Singh, had visited the site and based on his observations inferred the main bowli that women visit today to be of the Gupta period which makes it at least 1600 years old.

Freshwater streams run across Gurnal entering Naj stream while the whole site is littered with perennial springs. Prof. Pathak said that such sites are generally the origin of rivers and earmark geological history.

He said 1400 Saraswati-Indus Valley Civilization sites have been found in Rajasthan, Haryana, and Punjab.

Saraswati-Indus Valley civilization popularly known as Harappan Valley Civilization was the largest ancient civilization extending in the plains of the Indus river system, in the plains of now-extinct Saraswati River, up till the Ganges—covering larger regions in what is today Afghanistan, Pakistan, and Northern India.

“The northernmost Harappan sites in Jammu are found in Akhnoor and Manda. There’s a greater likelihood of some Saraswati-Sindhu Valley Civilization site at Gurnal as well,” he said. The distance between Akhnoor and Billawar is 82 miles.

“The Great Bath at the Harappa Valley site signifies the importance that civilization gave to bathing places. Is it a coincidence that in Gurnal today there’s a bowli for men and a separate bowli for women? At Least it demands an investigation,” said Prof. Pathak, adding that the site could yield artifacts of various periods.

“Government is requested to do a deep survey in concerned area in order to reveal our glorious past. Kashmir is land of Kalhana [author of Rajtarangini] the great historian,” said Pathak, a lifetime member of the Epigraphic Society of India. “There must be important historical facts.”