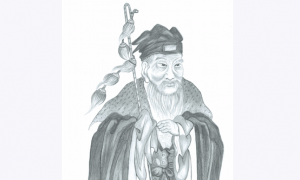 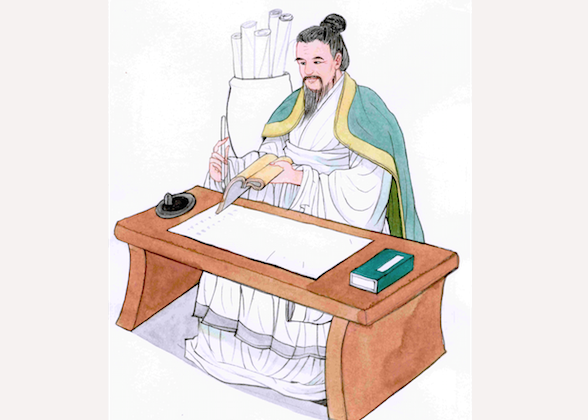 Sima Qian, author of the first full history of China, believed that a historian should be independent and produce an objective and thorough account of historical events. (Blue Hsaio/Epoch Times)
China

Sima Qian (司馬遷) was born around 145 B.C. during the Han Dynasty (漢朝) (206 B.C.–A.D. 220). He is regarded as China’s first and greatest historiographer for his momentous work, Shi Ji (史記), or Records of the Grand Historian.

Sima Qian grew up in a family of historians. His father, Sima Tan, served Emperor Wu of the Han Dynasty as Prefect of the Grand Scribes.

Sima Tan was responsible for keeping track of astronomical observations and calendar dates for ceremonies, as well as for transcribing a daily record of events in the court. Sima Qian diligently studied history and the classics from a young age under his father’s guidance.

In 126 B.C., Sima Tan arranged a journey through the kingdom for the 20-year-old Sima Qian. During the trip, Sima Qian visited ancient monuments and the graves of past great rulers. He studied extensively from a rich collection of historical records, including those of Confucius, and benefited greatly from this journey.

Upon returning to the capital, Sima Qian was appointed to a position as a palace attendant and accompanied Emperor Wu to inspect various regions across the country. Wherever he went, Sima collected and compiled local historical records.

Around 110 B.C., Sima Tan fell ill. He had earlier begun an ambitious project of producing the first full history of China, which was to cover the more than 2,000 years between the reign of the Yellow Emperor and that of Emperor Wu.

Sima Qian believed that historians should be impartial and independent, rather than serving as an echo of the emperor.

In order to record historical figures and events objectively and fairly, Sima Qian devoted a large amount of time and effort to collecting and verifying historic details, faithfully doing his best to ensure that the records were comprehensive and unbiased.

One challenge Sima Qian faced was how to record the deeds of the current and past emperors. He decided to record everything, both good deeds and bad, which did not sit well with Emperor Wu.

Suffering for a Greater Goal

In 99 B.C., General Li Ling surrendered to the Xiongnu, China’s enemies to the north, after he was captured following a courageous battle with a relatively small army. It was rumored that he eventually began to train the Xiongnu. This greatly enraged Emperor Wu who declared the general a traitor.

In court, Sima Qian was the only official to defend General Li. Furious, Emperor Wu ordered that Sima Qian be imprisoned to await execution for the crime of defaming the emperor.

The courts later reduced the punishment, sentencing Sima Qian to prison and ordering that he be castrated. Though this appeared to be a less severe sentence, it was expected to lead to an honorable suicide.

Castration was an extremely humiliating sentence and, since it was a son’s filial duty to preserve the integrity of the body his parents gave him, most men would commit suicide rather than suffer the ordeal.

However, in order to complete the monumental work of history and fulfill the promise he made at his father’s deathbed, Sima Qian chose to endure the humiliation rather than end his own life.

In 91 B.C., at the age of 55, Sima Qian finally completed the historical record, Shi Ji. It had taken more than 10 years of painstaking work.

Shi Ji is an extraordinary historical masterpiece, the first full history of China, spanning the ages from the prehistoric periods of the five sage kings, through the Xia, Shang, Zhou, and Qin dynasties, across the centuries to Sima Qian’s own time.

The book organized the complex and sometimes contradictory sources of the past into one book, drawing upon a wide array of sources. It covers more than 2,000 years of history and contains over 520,000 words.

Shi Ji is unique in that, instead of recording history chronologically based on events, it relates history based on the key figures involved.

In 130 volumes, or chapters, it presents history in the form of imperial biographies, timelines of events, treatises, genealogies of prominent families, and biographies of important figures, closing with an autobiography by Sima Qian.

In addition, unlike previous histories, which were written as official court chronicles under the supervision of the imperial family, Shi Ji was written independently.

It also contains valuable treatises on various topics of the time, including social rites, music, calendars, astronomy, literature, and economics.

Quotations of Sima Qian from Shi Ji, such as “recording nothing but truth” and “no boasting and no covering up,” have been highly praised by Chinese historians.

Despite living in difficult times and enduring a severe ordeal, Sima Qian remained upright and determined to pursue moral ideals in his work and his life.

By putting his personal honor aside, Sima Qian left later generations with an outstanding, full historical record of early China.