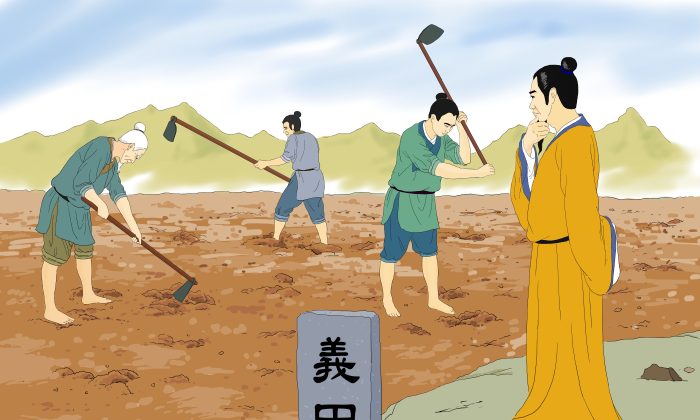 Fan Zhongyan endured many hardships while maintaining a philosophy of service that encouraged others to “Be the first to care about the nation’s fate, the last to enjoy its comforts.” (Zhiching Chen/Epoch Times)
China

Fan Zhongyan (A.D. 989–1052) was a prominent Confucian scholar and politician in the Northern Song Dynasty. He was known for the famous saying: “Be the first to care for the nation’s fate and the last to enjoy its comforts.”

Fan Zhongyan’s lessons about dedication started early. When Fan was two years old, his father passed away. From a very young age, he had to bear many hardships during his studies. The only food afforded him was two portions of porridge each day. In the winter, he had to cut frozen porridge into pieces for his meals.

Later, he found his life took an even worse turn when his mother left him and he had to seek lodging in a temple.

Lodged in a tiny spare room of the temple, Fan Zhongyan was astonishingly diligent in his studies. He washed his face with cold water to fight against tiredness, or took a nap leaning against a wall. It is said that he did not sleep in a bed for five years.

There was a time when a classmate’s father discovered that Fan could only afford one portion of porridge for his daily meal, so he had some delicious food sent over. Yet Fan did not touch any of it.

When asked why, Fan replied “I am very grateful for your kindness. However, I am concerned that such good food could spoil me and in the future I would not be content with my porridge.”

Honesty as a Matter of Course

Although he lived in poverty, Fan guarded his character with great vigilance. Once, he accidentally discovered an urn full of silver bullion buried in his room. He did not take any of it.

Shortly after, Fan passed the imperial civil service examination and started his political career. When the monks from the temple where he had stayed asked him for a donation, Fan told them about the silver bullion in the tiny room and how to find it.

Impressed by his honesty, the monks praised him and said, “With Fan as a government official, justice for commoners will finally come.”

Establishing a Legacy of Charity

While in service as a minister, Fan attempted to fight against corruption and nepotism. He also proposed a series of policies to reform the civil service examination and the land allocation process, and to improve the military forces.

Fan advocated selecting people knowledgeable of economics for administrative positions in order to improve agricultural management. However, the policies failed to be implemented beyond a year due to pressure from older conservative officials fearful of losing their power and interests through the reforms. Eventually, Fan was forced to leave the capital to take a lesser local position.

After retiring to his hometown, Fan acquired a large tract of farmland with the savings from his long government service. He carefully selected people to run the land as a charitable farm, providing jobs for local people.

The farming profits were used to fund the educations of young local students from poor families, and to provide care for the elderly. Fan’s descendants inherited this charitable mindset and kept this type of farm running for generations.

The Needs of Others First

It has been said that Fan Zhongyan always put others first, even in the matter of finding himself a burial place. According to traditional Chinese beliefs, proper feng shui (a practice of creating a harmonious environment) of the family’s graveyard is essential to the fate of its descendants.

At one spot, there were several huge stones lying on the ground in a shape like arrows piercing a human heart. The Taoist practitioner told the man that that place had the worst feng shui and that whoever chose it as a burial site would have no surviving descendants.

Upon hearing this, Fan Zhongyan recalled what an ordeal it had been to be a court official. He thought, if a family line must end, it should be his own rather than another’s. So he bought the place for his future grave.

When the people learned that such a righteous and compassionate official as Fan Zhongyan would willingly accept the end of his line for the sake of others, they all prayed to the Heavens to prevent it from happening.

According to legend, on the day of Fan Zhongyan’s funeral, the people’s prayers were answered.

Suddenly, a thunder storm sprang up. During the storm, all the ill-placed stones lying on the ground miraculously stood up on end in the form of an arrow pointing up to the Heavens, an auspicious feng shui shape! The portent of a dying family line became that of a flourishing one.

Fan Zhongyan lived a very simple life and spent the majority of his income on charitable acts. Although he owned much land and a profitable farm, he never built a large homestead for himself.

After his death, Fan’s family held a very basic, small-scale funeral for him. Yet hundreds of people turned up to express their gratitude and deep sadness. People who had received Fan’s help through his farming program mourned him with a three-day fast.

Hearing of Fan’s death, people in the places he had once served also built memorial temples and erected statues of him. And there was a famous saying during the Song Dynasty: “Thanks to Fan Zhongyan, the Song imperial court can enjoy peace.”